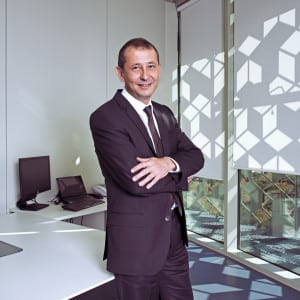 [Via Satellite 08-19-2014] Spain-based satellite operator Hispasat has set its sights on Latin America as the company’s new top growth market. The consequences of Europe’s economic situation have resulted in a “lack of dynamism,” according to Hispasat CEO Carlos Espinós. Hispasat is seeing much more growth across the Atlantic and is pivoting to have an even larger presence in Latin America for the long term.

“The European market continues to suffer from the crisis and is in recession; it has not yet recovered enough impulse to grow with strength and decisiveness,” Espinós told Via Satellite. “Fortunately, and thanks to the internationalization process that we started 12 years ago, we have been able to counteract paralysis in this market with growth on the American continent, where 55.6 percent of our 2013 revenue comes from, especially from Latin America.”

Hispasat obtained new orbital rights for Broadcast Satellite Services (BSS) through its Brazilian subsidiary Hispamar Satélites in May 2014. At 61 degrees west, the Hispasat Group has rights to supply Ku-band services for 15 years. Hispasat already has big plans for these rights, and can renew them for an additional 15 years after they expire.

“These new rights will enable us to expand our services in Latin America and consolidate our position in the region, which is now our main market and one of the markets with the greatest potential for growth. The Amazonas 4A, which will be located at this position, will be one of the first satellites to use these rights in order to provide audiovisual services in several countries,” said Espinós.

The recently launched Amazonas 4A suffered an anomaly with a subsystem that affects the north panel. According to the builder, Orbital Sciences, this will likely reduce transponder capacity over the 15 year lifetime if found to be irreparable. The report on the fault has not been finished, and until the investigation ends, the cause and the consequences remain uncertain.

Espinós said Hispasat’s insurance on the spacecraft covers all possible losses, keeping economic impact to a minimum. Since Amazonas 4A is a growth satellite as opposed to a replacement, the incident will not have a negative impact on existing services. Hispasat already has plans to further up its capacity over Latin America beyond the impaired satellite.

“The contingency plan that we have set out will enable us to complete the capacity lost in a short period of time. As a result, the fault will not drastically change Hispasat’s growth plans in Latin America. The most relevant measure in this plan was to approve and launch a new Amazonas 5 mission, which will take on the Amazonas 4A and Amazonas 4B capacity. This new mission is now underway,” said Espinós.

Amazonas 4B is also under construction by Orbital Sciences, and will use Hispasat’s new orbital rights at 61 degrees west. The satellite will carry 18 transponders and primarily target satellite TV platforms across Latin America.

Hispasat has not yet announced the details of Amazonas 5. The company’s latest satellite project, Hispasat 1F, is being manufactured by SSL. Both satellites are expected to launch before the end of 2016.

“Latin America is one of the areas in the world with the greatest potential for development in satellite telecommunications … in my opinion, the main growth drivers for satellite services in this area will be broadcasting, network connectivity services and broadband development. The number of television channels will multiply over the next 10 years, with a predicted growth of 44 percent and the number of channels that broadcast in HD is also going to increase exponentially, whilst at the same time, Ultra-HD will start to expand. All of this will naturally generate a considerable increase in the demand for space capacity,” said Espinós.

Hispasat expects the demand for Ka-band broadband and the demand for broadcast services to continue to increase throughout Latin America. There have been several major deals for High Throughput Satellite (HTS) services this year, notably, Hughes do Brasil’s purchase of all the Ka-band capacity on Eutelsat 65 and Via Sat Brasil’s purchase of all the capacity on Eutelsat 3B. Hispasat is hoping to gain more traction in this market.

Hispasat has also made significant strides in Ultra-HD  television. In April the company launched Hispasat 4K, a dedicated open channel where tests can be carried out for new content. Hispasat has had a dedicated 4K channel in Europe since 2013, but sees strong potential for high quality broadcasts in Latin America going forward.

“We trust that [4K] will soon be available in Latin America as well, although high definition TV in the area has still not been fully implemented,” explained Espinós. “However, the predictions are excellent: it is hoped that the number of high definition channels in the region will triple in the next eight years, going from just over 500 now to a predicted 1,770 in 2022. Therefore, Ultra-HD is only a question of time and regional operators are now expressing interest in the development of 4K. We hope that, along with the 2016 Olympic Games in Brazil, we are starting to see the first commercial services in this new technology.”

Espinós said he is not worried that Latin America will suffer from over-capacity as operators bring new satellites to the region, because the demand continues to grow. He admitted that this could present a short-term issue with a small fall in satellite fill rates during the next two to three years, but expressed confidence that it will not be relevant in the future. Latin America has large geographic areas that are extremely challenging for terrestrial connectivity. Satellite, he said, will become a key element in the roll out of necessary infrastructures. Hispasat aims to be part of that solution.