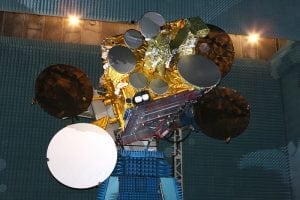 [Via Satellite 05-15-2014] Via Sat Brasil entered into a multi-year contract with Eutelsat do Brasil, the Brazilian subsidiary of Eutelsat, for the complete high throughput payload on the Eutelsat 3B satellite, scheduled for launch on May 26 by Sea Launch. Eutelsat will configure the Ka-band payload on the satellite to deliver full coverage to Brazil over five steerable Ka-band spotbeams. This represents the first time Brazil will have nationwide satellite coverage in the Ka-band to complement fixed and mobile ground infrastructure broadband services.

Via Sat Brasil will target specific areas of Brazil for consumer and Small and Medium Enterprise (SME) markets, notably offering solutions for high-tech companies in rural areas that have an increasing demand for Internet connectivity. The company also plans to expand its satellite Internet access to selected airline routes between Brazil’s main business cities.

“[Eutelsat 3B’s] architecture will enable us to offer high-quality ICT solutions that will reduce the digital divide across the entire country,” said Antonio Cast, CEO of Via Sat Brasil. “Thanks to the broadband service we will offer, no business will be deprived of the opportunity to grow because connectivity simply doesn’t meet their requirements.”