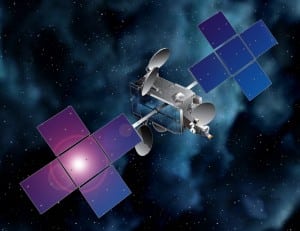 [Via Satellite 04-23-2014] Eutelsat received a shot in the arm for its Latin American business through the closing of a major deal with its Brazilian division. Eutelsat do Brasil has signed a contract with Hughes Network Systems do Brasil for all of the Ka-band capacity allocated to the Brazilian service area on the upcoming High Throughput Satellite (HTS) Eutelsat 65 west A. The agreement cements the entirety of the satellites Ka-band capacity for Hughes do Brasil for 15 years and closely follows the renaming of Satmex to Eutelsat America.

This agreement also reinforces Hughes’ ambitions in Latin America. EchoStar, owner of Hughes, was previously in talks with GVT subsidiary Vivendi to create a Joint Venture (JV) Direct-to-Home (DTH) pay-TV service in Brazil. The joint venture fizzled out in December 2013, but EchoStar stated that the company “remains committed to use its expertise in satellite and video technology to deliver a unique pay-TV service to Brazil via a high-powered BSS satellite.” Eutelsat 65 west A also supports C- and Ku-bands for video broadcasting. Andrew Spinola, senior analyst at Wells Fargo, believes this new agreement may open the door for EchoStar to accomplish this goal.

“EchoStar’s JV agreement with GVT for DTH video services in Brazil was dissolved a few months back and the company was considering whether to pursue other JV partners, go it alone in Brazil, or sell the asset,” he said in a research note. “This announcement makes us think that SATS is pursuing the Brazil market long-term and will likely announce a video service in the future to complement the broadband service.”

The Eutelsat 65 west A satellite supports a Ka-band payload of 24 spot beams. A total of 16 beams cover Brazil and will generate 24 Gbps of throughput. SSL is building the satellite and it is expected to be operational at the 65 degrees west orbital position by early 2016.

Both companies anticipate the new satellite to be a springboard for mass-market broadband services in Brazil for consumers as well as businesses. Brazil’s expansive and varied geography make it a prime location for satellite, which can bring content to areas that have little or no terrestrial networks. Hughes will deploy high throughput Jupiter technology, which can support throughputs exceeding 100 Gbps, for ground systems and customer premises terminals.

“We are delighted to pursue our longstanding relationship with Hughes and to see evidence that the unique proposition of Eutelsat 65 west A is attracting anchor clients in Latin America well in advance of its launch,” said Michel de Rosen, chairman and CEO of Eutelsat. “The high throughput capacity over Brazil provided by this satellite will be a powerful contributor to the country’s ongoing transformation into an Information Society and vindicates our strategy to bring satellite infrastructure to clearly identified markets where it has a long-term role to play in the broadband mix.”

According to Spinola, this agreement begins to clarify EchoStar’s ambitions with the additional borrowing capacity created by the Dish swap and the reasoning behind why company materially increased its capex guidance for 2014 last quarter.

“This announcement tells us that SATS is almost certainly going to build the satellite to replace the existing satellite in Brazil for video services, but it also tells us about a new direction for the company (i.e. broadband services in Brazil) but because it will use leased capacity it will not initially require capex,” said Spinola. “EchoStar’s scope and addressable markets continue to expand rather dramatically and we continue to expect more big news to come in the next few quarters as we learn the answers to the two questions highlighted above.”