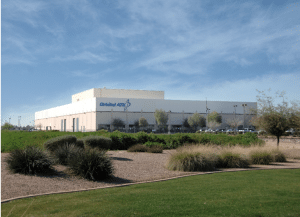 [Via Satellite 10-27-2015] After losing a satellite deal earlier this summer due to the lack of Export Credit Agency (ECA) support, Orbital ATK clenched a new order for a geostationary satellite this month.

“We recently received another commercial satellite order in the form of a follow on contract from an existing customer,” David Thompson, president and CEO of Orbital ATK, said Oct. 27 during the company’s third quarter earnings call. “Since this occurred in early October, it will be included in our fourth quarter booking totals.”

Orbital ATK joined the list of U.S. satellite manufacturers losing business over absence of the Export Import Bank of America (Ex-Im Bank), which Congress decided not to reauthorize at the end of June this year. Thompson said the inability to leverage the ECA caused a previous order, the Azerspace 2/Intelsat 38 joint satellite, to go to another manufacturer. That contract went to California-based Space Systems Loral (SSL), of which MacDonald Dettwiler and Associates (MDA) of Canada is the owner.

Thompson did not say who the new satellite order is for, but confirmed it will be based on the company’s GEOstar 2 platform. The win is Orbital ATK’s second for the year, following an award in February for SES 16/GovSat, the first satellite of the newly formed LuxGovSat joint venture between SES and the Luxembourg government. SES 16/GovSat is based on the GEOstar 3 platform.

The year 2015 has been relatively weak for GEO satellite orders, where the average number of annual awards is typically in the mid to low 20s. Thompson estimated the full year will only see between 16 and 18 new satellites.

“It has been a fairly tough year so far. New contract activity has been limited to 10 announced satellite orders so far — at least by my count — with another two or three satellites that we believe have been awarded but have not yet been announced,” he said.

Thompson added that Orbital ATK was also selected for a third contract by a new operator in the second quarter, but that the order has stalled out temporarily due to near-term financing delays. He said Orbital ATK is targeting at least one more order for the year, though market conditions remain less than favorable.

“There are some indications that several of the major operators may be reducing their capital investment for a while as they are experiencing some downward pressure on their own transponder pricing. And as many of the operators have some major additions of satellite capacity that are now in the production pipeline — that will come on stream here over the next couple of years,” he said.

In addition to contracts received in 2015, Orbital ATK is working on the Hylas 4 satellite for Avanti, the Al Yah 3 satellite for Yahsat, and the Thaicom 8 satellite for Thaicom. Blake Larson, Chief Operating Officer (COO) of Orbital ATK, said Thaicom 8 is on schedule to enter final testing soon, leading up to an on schedule delivery early next year. Orbital ATK also completed in orbit testing for the U.S. Air Force’s first two Geosynchronous Space Situational Awareness Program (GSSAP) satellites. Larson said more satellites in this constellation are underway.

“The second set of these satellites are undergoing environmental testing at our Dulles, Virginia facility and are scheduled to be launched in 2016,” he said.

Thompson said Orbital ATK is also expecting NASA to announce its decision for the second Commercial Resupply Services (CRS-2) contract “as early as next week,” for which the company is a strong contender.

“We expect Orbital ATK to be named as a CRS-2 winner and believe the announcement will serve as a further catalyst for the stock,” Chris Quilty, Senior Vice President (SVP) of equity research at Raymond James & Associates, wrote in an Oct. 27 research note.

Orbital ATK, then Orbital Sciences, was among the winners of the first CRS contract along with SpaceX to conduct resupply missions to the International Space Station (ISS). In addition to bringing up station resources and research, CRS missions have also provided a pathway to Low Earth Orbit (LEO) for many small satellites.

The first return mission for the Cygnus capsule is currently slated for Dec. 3, atop an Atlas 5 rocket from United Launch Alliance (ULA). After the October 2014 Antares rocket failure, traced to the AJ-26 engines from Aerojet Rocketdyne, Orbital ATK consolidated its remaining five missions under CRS-1 into four. All are planned with an upgraded Cygnus, with two launching aboard the Atlas 5 and two launching on the revamped Antares, once re-engined with RD-181s.

“With the successful installation of engines, avionics and feed lines, we will roll the first stage out to the launch pad in January to conduct a hot fire test to verify the launch pad and the engines in advance of our return to flight in the spring,” said Larson.

Thompson said repairs to the Wallops Island, Va. Launch pad have been completed. Orbital ATK shipped the service module for Cygnus to the Kennedy Space Center earlier this month for the first Atlas 5 mission.

Larson said Orbital ATK is on track to achieve more than $60 million in cost reductions in 2015 and $100 million or more in 2016 thanks to synergies from the Orbital Sciences merger with ATK’s aerospace and defense groups. He said more than half of the savings are expected to flow back to customers, with the remainder contributing to the company’s bottom line. Additionally, he said Orbital ATK is pursuing about a dozen new opportunities thanks to the increased capability of the combined company.