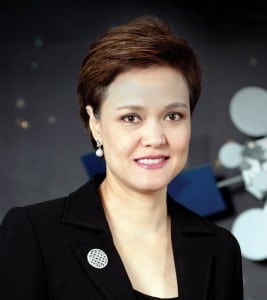 [Via Satellite 5-12-2014] Thaicom saw a significant increase in its revenues in the first quarter this year compared to the same stage last year. This was one of the highlights of its most recent financial results. The operator gained revenues of 540 million Baht ($16.02 million) in the first quarter, a more than 35 percent increase compared to the same stage last year. Pisut Ngamvijitvong, a satellite equity analyst at CIMB, said in a research note that he expects sequential net profit growth in the following quarters to continue due to a jump in Thaicom 7’s utilization rate (from 40 percent in the first quarter of 2015 to 100 percent in the third quarter). Chaiwat Arsirawichai, a research equity analyst at UOB KayHain, said his company was also maintaining a “Buy” rating on the stock. He said that the operator’s strong earnings are likely to continue over the next two quarters.

In an exclusive interview with Via Satellite, Thaicom CEO Suphajee Suthumpun talks about the company’s latest results as well as where it hopes to grow next.

VIA SATELLITE: Do you expect Thaicom to achieve overall revenue growth in 2015 compared to 2014? What do you see as the key growth drivers for the business?

Suthumpun: As we head further into 2015, our sustained growth will be fueled by new partnerships and acquisitions, allowing us to serve the individual needs of each customer more effectively and efficiently than ever before. Our long-term aim continues to be to realize ubiquitous connectivity through our technology and we are committed to taking every possible measure to achieve this.

Another key growth driver is the upcoming launch of Thaicom 8 in the first quarter 2016. In addition, we believe that with our strong “3Cs” — coverage, content, and capacity for growth — we will be able to sustain our growth net profit for years to come.

VIA SATELLITE: How do you view the prospects for the company outside of Thailand? Where are the big opportunities for Thaicom internationally?

Suthumpun: Last year was a landmark for Thaicom in terms of expansion into new markets, such as our end-to-end satcom mobility services and solutions for air, land, and sea vehicles. This saw Thaicom become the first operator in Asia-Pacific to address the overwhelming demand for online connectivity in the skies, introducing a commercial in-flight connectivity service using Ku band, which delivers 3G-like speeds, while our crew welfare service provides connectivity to maritime customers.

We also expanded regionally with the launch of Africom 1 in January and Thaicom 7 in September 2014. These satellites are now providing Asia and Africa with satellite communication end-to-end services to satisfy the continent’s growing demand, where digital TV and video distribution, DTT, mobile backhaul, and other services to provide rural areas with data and voice connectivity are growing rapidly.

What’s more, with 10 million Ultra-HD TVs expected to be in use by 2016, we are developing Ultra-HD technologies and channels to ensure our broadcast partners’ operations are future-proof. We already have more than 110 channels on our platform going out in HD, almost double the amount we offered a year ago.

As we head further into 2015, the future and connecting our customers to it will be a key focus for us. In particular, we are making special efforts to improve network coverage in rural and previously underpenetrated areas, as well as to back up terrestrial networks — for example, in Japan, where we have provided cellular backhaul services to some of the country’s largest cellular operators since 2011.

VIA SATELLITE: What are your capital expenditure plans in terms of new satellites? Will you need to invest in new capacity over the next year?

Suthumpun: As I mentioned, we plan to launch Thaicom 8 next year and most of its CAPEX has already been paid. For future investment in new satellites that we plan to launch by the year 2019, we believe that our strong financial performance with relatively low gearing ratio (Debt/Equity) of 0.62x will enable us to raise more funding. This will allow us to consider investing in additional capacity which, however, would prerequisite adequate demand in our key markets and pre-sale commitment prior investment and launch among other factors. Pre-commitment and pre-sale is very important to us when we approach new projects and this was our method with Thaicom 6, Thaicom 7 and Thaicom 8.

VIA SATELLITE: How do you view the data opportunity for Thaicom? How would you compare it against the traditional broadcast business?

Suthumpun: Thaicom has a unique value proposition in that we operate both broadband and broadcast satellites, allowing us to seize both opportunities. Both segments promise significant growth opportunities in the region, such as the growth of data consumption on IP traffic and the increasing demand for HD and Ultra-HD channels in the future.

The traditional terrestrial broadcasting and broadband industries are undergoing drastic changes and satellite is an enabler of this change and an ecosystem where broadcast and broadband are converging. This is not new and the question now is what does the convergence of broadcast and broadband mean for the future of satellite TV in a hybrid connected world? A huge benefit of satellite is its ability to service large coverage and rural areas. Hence, rolling out broadband services for on-demand TV to land-based locations, which require high-speed broadband, is not cost-effective for providers. I am glad to point out that in 2015 satellite is very much alive and has a bright future as it is a cost-effective and efficient way of transmitting both broadcast and data feeds over large and difficult to reach areas.

VIA SATELLITE: What impact will LEO and MEO systems have on an operator like Thaicom? Do you believe this will have a long-term impact on FSS operators such as Thaicom?

Suthumpun: The latest initiatives of launching LEO satellites by Leosat, OneWeb and SpaceX have certainly made waves in our industry but it is too early to say what impact the “Internet in Space” will have on Thaicom and the industry as a whole. LEO will need to prove its financial viability for the deployment of broadband services on a large scale. What might be feasible from a mere technological point of view, might in the end not qualify as a sound business model.

At the moment, the satellite establishment is watching what there is to come and if these new ventures will finally lift off, powered by the launch of hundreds or even thousands of satellites into LEO to deliver worldwide ubiquitous broadband coverage. If business models and technologies should prove to be successful, it will certainly have a disruptive impact on many FSS operators and the satellite industry as we know it. But at Thaicom we embrace change and like to think of everything as an opportunity and not necessarily a threat. Thaicom’s strength lies in our long experience with the regulatory and local market conditions in Asia Pacific.

With change comes opportunity and growth is what every company searches for. I think if LEO and MEO actually can be on board, then we will find ways of making this an advantage for us — for example, by combining our strengths through platform partnerships.

Over the years, Thaicom has worked hard to bring costs for broadband Internet capacity down as we know that any innovation in our industry is based on the economics and proven technology to support it. I think GEO satellites are here for a long time to stay.