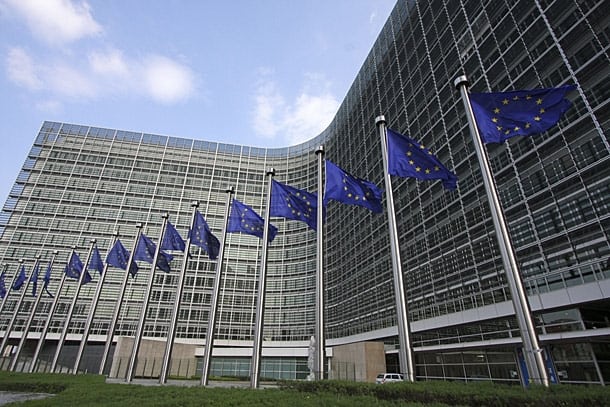 EU flags in front of the European Commission. Photo: EUD.

The European Commission has begun work on a number of strategic 5G initiatives to ensure the European Union (EU) can remain economically competitive as the nascent technology develops. According to Nathalie Vandystadt, the European Commission’s spokesperson for digital economy and society, the organization’s main concern is preventing a repeat of Europe’s slow rollout of 4G networks.

“5G is crucial for EU competitiveness at a global level. We have been taken over in 2G, 3G, [and] 4G,” Vandystadt said. “For example, [in the] mobile equipment industry, we had 80 percent of the market in 2008 and because we were not ready for 4G mass deployment, the EU industry lost almost its entire market share for mobile phones.”

The European Commission supported a study that assessed the benefits, impacts and technical requirements for the 5G rollout. According to the study, although the total investment related to 5G deployment is estimated at 56 billion euros ($65.7 billion), analysts expect that by 2025 5G will generate more than 113.1 billion euros ($132.7 billion) annually across the four major verticals that will take advantage of 5G early on: automotive, health, transport and energy.

“5G introduction has the potential to create 2.3 million jobs in Europe and we cannot miss out on this opportunity,” added Vandystadt.

However, before these new applications and use cases can be implemented, European countries must coordinate to determine the most efficient ways to build out infrastructure, as well as how to harmonize and distribute available spectrum. On the infrastructure side, Vandystadt said commercial 5G rollout will depend largely on the deployment of a dense fiber network that ensures backhauling for 5G cells. “This is a prerequisite to achieve the key benefits of 5G,” she said.

“And we do not want to repeat the fragmented emergence of the 4G services again in the case of 5G. The EU was the first to develop the fourth generation of communication networks (4G) but was late and slow in deploying it compared to other regions such as the United States and South Korea. A delayed and fragmented assignment of radio spectrum had a negative impact on wireless network coverage and penetration in Europe,” Vandystadt explained.

The European Commission estimates that up to 56 GHz of spectrum will be needed to meet the demand of 5G users and applications, including connected cars, health-related services and smart cities. A first step toward that goal was the Commission’s proposal to allocate “fresh” mobile spectrum within the 700 MHz band for wireless broadband, which member states agreed upon earlier this year. “But more needs to be done,” Vandystadt said. “Market players should be able to rely on clear roadmaps for the timely availability of key bands throughout the Union and a predictable legal framework for the granting and renewal of spectrum usage rights.”

Vandystadt warned that delayed allocation of spectrum could cause Europe to again fall behind its international counterparts. “The result of the slow and uncoordinated availability of spectrum resources in Europe is that it affects possibilities and incentives for operators to invest in the development of their networks and, consequently, it causes a lengthy delay in the launch of innovative services,” she said.

European nations are relatively small compared to the massive markets in countries such as the U.S. and China. To ensure there is a large home market for 5G products and services from the start, the European Commission has partnered with the 5G Infrastructure Association to form the 5G Public Private Partnership (5G PPP). The organization is preparing to launch 5G trials across multiple industries, which Vandystadt said is a useful complement to the early ongoing industry trials targeting high speed radio access.

The EU is also working alongside member states and private stakeholders to agree on a strong EU position on spectrum in the International Telecommunication Union (ITU), Vandystadt said. The European Commission sees globally accepted standards on 5G as critical to achieving the technology’s full potential, and has already signed joint declarations with Brazil, China, Japan and South Korea, with additional agreements with the U.S. and India under development.

“The implementation of 5G demands an ambitious forward-looking timeline and coordination between member states, to allocate and harmonize the available spectrum bands in Europe and with third countries,” Vandystadt said. “In order to meet the connectivity requirements of 5G, a timely access to spectrum is crucial and needs to be assured.