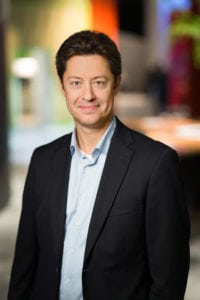 Satellite operators believe 5G will be a huge opportunity, but for wireless players the opportunity will undoubtedly be even bigger. Ericsson, a major player in the 5G arena, publishes a regular mobility report, which looks at the state of the market. Joakim Sorelius, head of 5G and Radio Access Network (RAN) architecture at Ericsson, told Via Satellite that even he found some of the findings of its latest research “quite astonishing.”

“Firstly, there will be more than half a billion 5G subscriptions by 2022. In only a few years, we expect 5G to take off quite quickly. Twenty-five percent of all subscriptions will be 5G in North America in 2022, representing the highest market penetration in the world. Then you will have Asia-Pacific, with 10 percent of all subscriptions taken out in 2022 expected to be 5G, and especially the northern part of Asia. The whole of Asia will see 10 percent penetration but in the north and northeast, it will be more in the range of the U.S. numbers. That is markets like South Korea, Japan and China,” he added.

When looking at development of broadband, Sorelius says 90 percent of subscriptions will be mobile broadband, which basically means that everyone who has a telephone will have a smartphone. He called this “a very strong foundation” for the wireless industry.

When looking at the Internet of Things (IoT) market, Ericsson believes there will be 29 billion connected devices by 2022, of which 18 billion will be related to IoT.

However, while the talk of 5G has been a constant in the satellite industry over the last year, the question is when things will actually rollout. In terms of the timeline, Sorelius said Ericsson sees these major deployments happening around the 2020 timeframe. “Standards here will be finalized by mid-2018 (June), and thus there will be some early markets before 2020. But if you talk about major global rollouts, it will be in the 2020 timeframe. The two main enablers are firstly, that the standards are ready, and secondly the ecosystem. Even though we believe there will be early chipsets and terminals available quite soon after the standards are finalized, it still takes some time for the broader ecosystem to develop for the global market for new technologies,” he said.

As people start to use their smartphones to watch content, the bandwidth needed will only increase significantly over the next few years. Streaming over 4K will be a challenge due to the amount of bandwidth required. Sorelius pointed to the fact that one 4K stream requires over 15 Mbps and said this is more than what you can expect from a loaded 4G network. He admits the wireless industry will have to look at new spectrum assets to provide these services to a broader public. “We talk about 15 Mbps for one stream. In the United States, households are regularly watching more than one stream at a time. We are also getting there in Europe. Basically you would need to have a guaranteed pipe of 15 to 30 Mbps to every household. You quickly come to the conclusion that we need a lot of spectrum. Right now, we don’t have that spectrum on the lower bands. We are talking about the bands above 6 GHz so that we can cost-efficiently provide these services. We have the 25 GHz band in Europe, the 28 GHz and 39 GHz band in the United States, and these bands are getting a lot of interest,” he said.

Sorelius said regulators across the globe are looking at this issue, which is of keen interest to wireless players. “The FCC recently issued an order that these bands which previously had been used for fixed applications could now be used for mobile applications. There is lots of bandwidth available in these high bands, and regulators are looking at releasing this bandwidth for 5G services,” he added.

The dizzying pace of change in the wireless world is often bought up at the SATELLITE Conference & Exhibition. Industry execs such as ABS Chief Executive Officer Tom Choi have lamented at the pace of change in satellite compared to the wireless industry. While 4G is hardly mainstream yet, plans for 5G are going ahead at a strong pace. Sorelius says if you look back, 4G was introduced to target a very clear need and market segment, to handle all of the smartphone traffic that was overloading the 3G networks. He says 4G was very much optimized to handle smartphone traffic but it did not take into account all other future services. There are notable differences with 5G.

“5G from our perspective is seen as a use-case driven technology. We are looking at the new use cases that will require wireless and cellular connectivity in the future. We are designing a system that can handle a wide variety of services from low bit rate, low demanding sensors up to very critical applications for industries such as manufacturing and healthcare for example. And you have enhanced mobile broadband in-between! There are also use cases and scenarios that we cannot predict today. In the 5G standard, we are leaving a certain amount of flexibility so we can include new capabilities in the future. If 4G was a mobile broadband system then 5G is a system for all connectivity demands that we can foresee in the future,” he said.

In terms of what happens next, Sorelius said 2016 was mostly about field trials and proving the radio interface part. He believes 2017 will be more an end-to-end year, connecting all the different pieces of the 5G system and creating a system that can handle this variety of requirements. “We will also see that major parts of the 3GPP standard will be finalized, which will mean companies that are building hardware, like the chipset industry, can be well underway to develop the components for their first 5G chipsets. You will see a lot of announcements around those capabilities from different players in the industry,” he added.