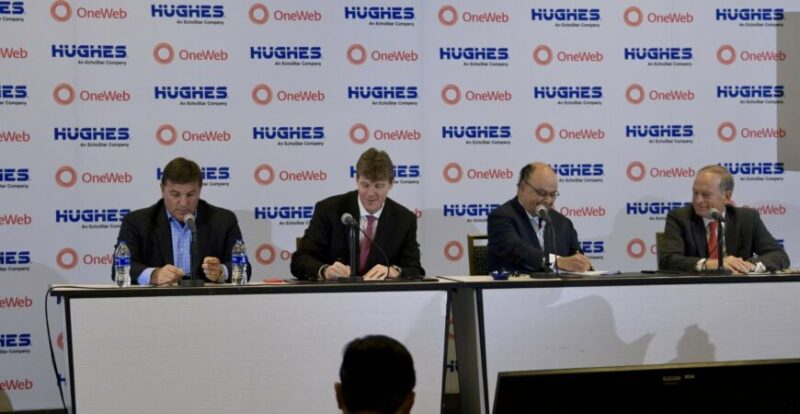 Hughes Network Systems has agreed to distribute OneWeb capacity to its customers in two agreements announced Thursday, Sept. 9 at SATELLITE 2021 for the United States and India. The distribution agreement for the U.S. focuses on enterprise services, and the companies have reached an MOU to distribute services in India to large enterprises, government, telcos, and ISPs in the rural and remote parts of the country.

Services will be offered by Hughes Network Systems and Hughes Communications India Private Ltd., respectively. Hughes President Pradman Kaul said at a press event that the company’s joint venture with Bharti Airtel in India is expected to close later this year.

“This agreement is another example of our commitment to deliver high-quality, continuous internet access to areas in need including in rural and remote areas of the U.S and India,” OneWeb CEO Neil Masterson commented.

This will combine Hughes Geostationary Orbit (GEO) satellites and network technologies with OneWeb’s satellites in Low-Earth Orbit (LEO). The companies shared a demonstration on Thursday of this multi-orbit connectivity. It showed Hughes ActiveTechnologies software transmitting different types of traffic like streaming and gaming over the most efficient path, whether it be OneWeb or JUPITER HTS.

The partnership further cements the close relationship between Hughes and OneWeb. Hughes is an investor in the OneWeb ownership consortium through parent company EchoStar, and also an ecosystem partner, developing gateway electronics and the core module that will power every user terminal for the system. The companies are also working together on a U.S. Air Force Research Lab contract to demonstrate LEO connectivity in the Arctic.

This article originally appeared in the SATELLITE Show Daily.