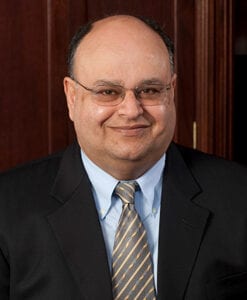 Hughes announced this week that it will invest $50 million into OneWeb, joining the U.K. government and Bharti Enterprises in their acquisition of the Low-Earth Orbit (LEO)  constellation company.

Hughes has been a longtime partner of OneWeb and was also an investor through parent company EchoStar. Before OneWeb filed for Chapter 11 in March, Hughes had a contract to produce a ground network system supporting the constellation, and Hughes was also  distribution partner for OneWeb.

Hughes President Pradman Kaul spoke with Via Satellite about the investment, and how OneWeb’s Low-Earth Orbit (LEO) constellation can expand Hughes’ reach beyond its satellites in Geostationary Orbit (GEO).

VIA SATELLITE: Tell me the story of this investment. How did Hughes decide to invest in OneWeb again and join the consortium with the U.K. government and Bharti Enterprises?

Kaul: We were part of the OneWeb team pre-bankruptcy, we had an investment in the organization at that time. We were playing the role of a vendor, developing the gateway terminals and terrestrial network that supported the gateways. We were also a potential customer of OneWeb, and had signed a distribution agreement where we could distribute the service to our customers all over the world. All of that we’d been developing over the last three years, but unfortunately had to stop when OneWeb went into Chapter 11.

We had good relations with both the U.K. government, and with Bharti Enterprises. So, we started some discussions with them on potentially participating in this consortium. As events developed, they invited us to join the consortium. We were very happy to do so.

VIA SATELLITE: What does this investment in OneWeb mean for Hughes? Do you see it as a continuation of the work that you have been doing with OneWeb?

Kaul: We’ll continue the work. In fact, we’re talking about potentially expanding it a little bit. But more than that, having a LEO offering combined with our GEO offerings on JUPITER and in South America, Africa, and the Middle East is critical to our strategy going forward. In the GEO world, we are the leader today, and it’s a tremendous tool that we have with our existing JUPITER platform offerings.

LEO allows us to have coverage in every square inch of the globe. We now have polar coverage and low latency. If there are applications that are latency sensitive, we can now address it. In our service offerings, we will use LEO to complement GEO, and our offerings to the government, and enterprises for mobility like aeronautical and maritime will be strengthened significantly. It should make our business position in the managed network services significantly better.

VIA SATELLITE: Joining the consortium with the U.K. Government and Bharti enterprises, what do you see as the value those two entities bring as partners in the consortium?

Kaul: They’re obviously very eminent companies and have been partners in different opportunities in the past. A few months ago, we reached an agreement with Bharti in India to merge our Indian managed network services subsidiary with Bharti’s managed network satellite services entity. They’re going through regulatory approvals in India. We were already developing the model with India as the first country for us to work jointly together. Over the last 15 years we’ve done a number of things in the U.K., some of them with the cooperation of the U.K. government.

VIA SATELLITE: Did you have any qualms investing in OneWeb again, after the company went into Chapter 11?

Kaul: When a company goes into Chapter 11, it’s something that you pause and think about. But, I think we were sufficiently close to OneWeb and knew the full background. We were making decisions based on knowledge and facts, rather than fears. We were going in with our eyes wide open.

VIA SATELLITE: Can you give any insight into long-term planning for this investment? Will there be more satellites launched, for example?

Kaul: In time, OneWeb will make more announcements about what their plans are.

VIA SATELLITE: Can you speak more about Hughes’ strategy in LEO? You mentioned earlier there being ways for Hughes to expand service offerings.

Kaul: It’s the concept of a hybrid managed network service. Up to now, when we offer a customer a service, the only tool in our quiver of arrows was GEO capability, which doesn’t have 100% coverage of the globe. These two restrictions, coverage and latency, mean there’s a piece of the market that you can’t address with a Geosynchronous satellite system. With this hybrid networking concept where we will have both LEOs, hopefully, and GEOs, we increase the size of the market that we can address significantly.

VIA SATELLITE: In the future, would Hughes use OneWeb capacity for the Community Wi-Fi system?

Kaul: Certainly, because of coverage. Today, we have a managed network service for community Wi-Fi, [but there are] certain parts of the world where we don’t have coverage because we don’t have a beam from a GEO satellite on that particular geographic area. With the LEOs complementing it, we cover every square inch. We should be able to address many more geographic areas.

VIA SATELLITE: Are there any geographic areas in particular that Hughes would be looking to target first?

Kaul: We publicly announced in the past that we’ve signed a distribution agreement with OneWeb in India. That’s one big area, and there will be large parts of the world that are unserved and underserved, many of which we will cover with GEOs but there are many others that we will cover with LEOs. And somewhere down the road probably a terrestrial technique like fixed wireless.

Kaul: We shipped around six or seven gateways and we’re building the rest. We had a contract to build 40-some gateways, which will hopefully get renewed soon. When they went into Chapter 11 the contract stopped. We hope to continue to build the rest of the network out in the future as they come out of Chapter 11.

VIA SATELLITE: Can you talk a little more about the challenges to building these gateways?

Kaul: The basic technology has essentially been developed. We’ve already deployed a certain number of these gateways. The challenge now is getting the rest of them built and installed, and then running the network through the satellites and doing the normal stuff you do when you test a new system to make sure that everything is functioning properly. But it is a global network, it’s going to cover every piece of the world. There’ll be challenges, but I don’t think they’re insurmountable.