How Satellite Made a Difference in Nepal — Part Two 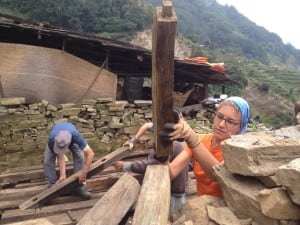 [Via Satellite 12-04-2015] When the April 2015 earthquake rattled Nepal, it destroyed sobering amounts of infrastructure, took lives, and displaced millions. Everyone affected was forced to adapt to the new environment. Himalayan Life, an organization already on the ground in Nepal doing projects in education, protection and caretaking for children, challenged itself to address the needs of those who had lost nearly everything. To reach those impacted, satellite technology played a critical role in providing much needed communications.

For the second article in a two-part series, Via Satellite interviewed Daniel Burgi, CEO of Himalayan Life, about his organization’s involvement as a surrogate first responder.

Himalayan Life stepped into action almost immediately following the earthquakes. Burgi said he trekked for five days with a local staff member into the hard-hit district of Sindupalchowk in order to get a clearer picture of the situation. Though the quake severely affected the capital city of Kathmandu, other smaller towns were also in great need.

“The further northeast we traveled, the more serious the situation grew,” Burgi recalled. “Anywhere beyond the town of Melamchi-Pul, we hardly found any houses that hadn’t collapsed completely.”

Burgi said much of the aid that came to Nepal went into Kathmandu while the folks in Sinupalchowk were still digging through rubble for finding the dead. The earthquake triggered several landslides and rockfalls in the steep terrain of the Himalayan foothills, and unstable ground remained in danger of slipping further.

“We found entire village communities high up on the summer grazing grounds of their yaks and other animals, with only the scantest of shelters and just about running out of food, not even to speak of safe drinking water or sanitary facilities,” he said.

Thuraya donated satellite phones to Himalayan Life, which the organization used to accelerate its efforts.

“I wish we would have had satellite technology in the initial phase of responding to the disaster, but we only chanced upon the Thuraya phones later in September,” said Burgi. “However, the technology is very helpful even now. As we have ‘adopted’ the village and valley of Yangri and have committed to walk with the some 500 people in this area for the foreseeable future, I appreciate satellite phone technology as a means of communication where we have little or no cell phone coverage. This means faster response time to specific needs, emergency call ability, etc.”
Yangri had slightly more than 100 houses in total before the earthquake. Burgi said the tectonic movement damaged or completely destroyed all the houses and the rest of Yangri’s infrastructure — it’s drinking water supply system, hydropower plant, bridge, and school. The physical damage also took a toll on people emotionally. Burgi said the losses brought many to “the edge of absolute desperation and hopelessness.”

Though quickly involved, Burgi said it took roughly a week to assess the situation and come up with a sustained plan of action. In adopting Yangri, Himalayan Life partnered with the community for a five-stage plan — relief, rebuilding infrastructure, rebuilding residential homes, local job and income generation, and education. The charity has made invaluable progress to date.

“[Himalayan Life] has already completed its work on the water canal, which is the life line for the village/valley providing both water for rice fields (main food supply for the villagers) as well as for the electric power plant — the only electricity source for the whole valley,” Najwa Ayoub, business development manager for the humanitarian sector at Thuraya, told Via Satellite. “The work on schooling has also commenced, although in a slightly different form. Due to the insecure paths through the mountains, instead of a central school for the whole valley, the organization has now decided to start local schools in the villages themselves, one of them already being fully operational.”

Burgi said Himalayan Life’s restoration effort in Yangri is ongoing, with only minor changes to the initial five-phase plan. Extended simple relief, mainly deliveries of food staples, medicine and other supplies is the largest change, he said. Burgi described the rebuilding process as slow not only in Yangri, but elsewhere throughout the country. This is compounded by not only tectonic instability, but other instabilities as well.

“Not only is Nepal reeling under the devastating effects of the April/May earthquakes, but also political instability and ethnic unrest are paralyzing the Himalayan nation. In fact, the struggle for power has Nepal’s vital borders with India virtually sealed off for all import and export, including vital supplies, medications, industrial raw materials and petroleum products. Rebuilding is being significantly slowed down by the chaos and lack of much needed supplies, but I am happy that Himalayan Life is making a difference in this situation to the people of Yangri,” said Burgi.

Fortunately, Himalayan Life has helped restore drinking water, schooling and basic essentials in Yangri. Burgi said reconstruction of the local hydro-electric power plant is in progress. However, due to continued aftershocks and political instability, he said Nepal is not prepared nor is the country progressing quickly enough to be ready for future natural disasters.

“Nepal is currently listed as one of the 20 areas prone to natural disasters by the UN-ETC-OCHA-ESOA Crises Connectivity Charter,” added Ayoub. “It is crucial to educate and train first responders, but for communications, pre-deployment is also a key factor that can save lives.”

Ayoub said Thuraya is planning to train and assist Nepalese first responders and municipalities on using its equipment and educating them about the importance of pre-deployment and preparedness. This will ultimately take place under the UN’s supervision and as part of the terms of the Crises Connectivity Charter that Thuraya signed in Geneva, Switzerland last month.

In the coming months, Himalayan Life is planning to build a model house incorporating an earthquake-resistant design, which Burgi said is to be a source of inspiration for rebuilding. Though not a relief organization by default, Burgi expressed thankfulness for the satellite industry’s willingness to aid the work in Nepal.
“As far as non-profits go, we/they are always strapped for cash, and simple lack of financial resources oftentimes preclude organizations like ours from the use of satellite technology. However, I do observe (with gratitude!) an increased sense of responsibility and desire on the part of industrial enterprises and even the satellite industry to contribute to relief efforts and poverty alleviation. Further increase of this socio-economic consciousness and sense of global responsibility will definitely enhance the work of non-profits and greatly benefit the communities whom the non-profits serve,” he said.