How Satellite Made a Difference in Nepal — Part One 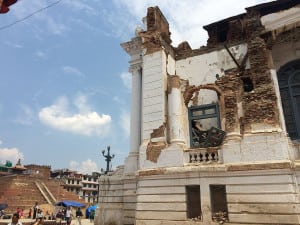 [Via Satellite 12-02-2015] Roughly half a year after a massive earthquake struck at the heart of Nepal, the country is still trying to recover. The magnitude 7.8 earthquake caused substantial damage to the capital city of Kathmandu, as well as to numerous towns and villages. Though much remains to be done, satellite communications was a vital part of the early response: coordinating supplies, search and rescue, and ultimately saving lives. Via Satellite spoke with two humanitarians who were on the ground about the use of satellite in the days and weeks following the quake. Our first in a two-part series focuses on Steve Birnbaum, humanitarian and disaster response Information and Communication Technology (ICT) consultant, who spent 10 days aiding the recovery.

On April 25, Steve Birnbaum was headed to Dubai for one of the United Nations Emergency Telecommunications Cluster’s (UN ETC) bi-annual meetings when the earthquake struck Nepal. Having not packed for a disaster, he and many other responders were tasked with shopping to get the appropriate clothing and gear while in Dubai before deploying. Birnbaum, who was chairman of GVF’s since-shuttered Humanitarian Assistance and Disaster Response (HA/DR) programs, said it was an unusual middle step, but once accomplished, attention quickly focused on getting to Nepal with critical resources.

“One of the first things we decided to do was to look at potential sites for Information and Communications Technology (ICT) deployments outside of Kathmandu where the quake was impacting, working with the ETC and other organizations, [Non-Governmental Organizations] NGOs, NetHope members as well as UN partners and governments to figure out where things were needed. One of the very useful tools that we had in those early days, I brought with me in two aluminum cases that were airline checkable somewhere on the order of 25 IP+s and over 35 SatPhones,” said Birnbaum. “Because of the small size and weight, it was very easy to put a bunch in airline checkable cases. What that meant was, as soon as I was able to arrive on the ground, we started distributing those to Emergency Telecom Cluster and NetHope members, as well as other humanitarian partners that needed the equipment as they were going out into these far-flung areas.”

Birnbaum deployed to Nepal as part of the NetHope team, with sponsorship from Mobile Satellite Services (MSS) provider Thuraya. He said that, because the quake affected so many areas both to the east and west of Kathmandu, there were small assessment teams operating quite remotely, and having that portable equipment very early in the response was critical for them. Fixed Satellite Service (FSS) support, which came from several operators, required heavier equipment and was not largely available until follow-on cargo shipments arrived.

Birnbaum described the satellite industry as incredibly supportive, especially at the senior executive level, of industry collaboration during disasters. In the FSS sector, he described Intelsat, SES and Yahsat as big supporters. During 2013, Birnbaum participated in Nepal’s regional military exercise Pacific Endeavor, which is organized and sponsored by the United States and focuses on military disaster communications. He attended as part of GVF. Birnbaum said this exercise helped prepare Nepal for natural disasters, but that the country, like all others, could do better.

Through Thuraya, he had access to XT Lite, some XT phones, and a first-ever XT Pro SatPhone a week before official launch. Birnbaum said a significant improvement in the XT Pro — the implementation of a micro-USB instead of a proprietary banana plug — meant less cables to carry, and hence less weight. Less weight meant more equipment and ICT could be transported to those in need. In addition to Birnbaum, Thuraya supported other humanitarian efforts in Nepal as well.

“We reached out to all our partners and end users (NGOs, UN-ETC, first responders, and search and rescue teams) to reassure them about the availability of our satellite service in covering the affected area through both data and voice,” Najwa Ayoub, business development manager for the humanitarian sector at Thuraya, told Via Satellite. “We then deployed satellite mobile phones and broadband terminals to aid in restoring critical communications and help coordinate relief efforts where terrestrial telecommunications infrastructure has been compromised or destroyed.”

Thuraya’s equipment was folded into many technologies used in the days and weeks following the earthquake. First responders used a large variety of satellite equipment that connected with diverse spacecraft. Birnbaum said this enabled them to leverage the best of constellations in both Low Earth Orbit (LEO) and Geostationary Earth Orbit (GEO).

“There are always pros and cons of each that are situation dependent,” he explained. “In the mountainous terrain of some more remote areas, one of the difficulties teams were encountering with phones that operated with LEO constellations was that you had a good chance of getting some signal anywhere, but as soon as the satellite you had connectivity with passed beyond the mountain range, you lost connectivity. So you had a better chance of perhaps establishing connectivity almost anywhere, but you very quickly lost it. Thuraya’s network had great GEO coverage with visibility to two satellites, so with the Thuraya phone, as long as you were able to get to an area where you had visibility on one of the two satellites, you could maintain a stable connection. It provided a lot of critical connectivity in those early days.”

NetHope, the U.N. and others, including the Luxembourg government, flew in Very Small Aperture Terminals (VSATs) that brought more support. Birnbaum said Mobile Network Operators (MNOs) and Internet Service Providers (ISPs) were also very supportive, and helped reduce the number of VSATs needed. MNOs and ISPs shared where their networks were down so satellite could fill the void. Ayoub said Thuraya remained active during the initial few months until terrestrial telecommunications were restored. These collective efforts help distribute resources to those in need during the crisis. Birnbaum said the readiness to share information made a major difference and the willingness to collaborate did not go unnoticed.

“I’m very proud of the industry for being supportive of that and getting behind my efforts over the last several years to try and improve that,” he said. “We really couldn’t do it without them.”