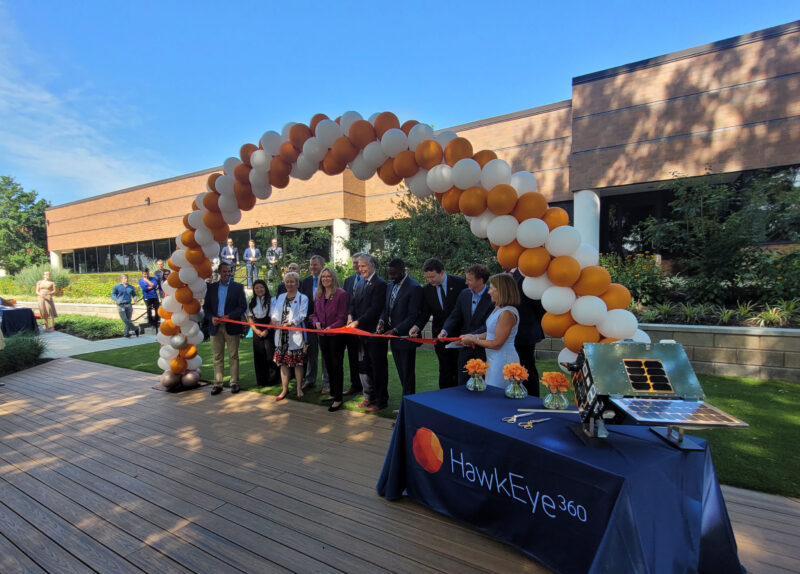 U.S. Reps. Jennifer Wexton, D-Va., and Don Beyer, D-Va., both spoke at the HawkEye 360 event, lauding the company’s ability to both deliver a new layer of radio frequency (RF) signal intelligence to the U.S. government and new high-tech jobs to the district.

“As most of us know, as we become more dependent on space-based technologies, bad actors have a new array of tempting targets to do us harm,” Congresswoman Wexton said in her remarks. “We’re all familiar with the three-letter agencies and the departments that keep us safe every day. I know a lot of them will actually benefit from the technologies that HawkEye 360 is developing here at this facility. In addition to our greater reliance on space technology, the state of Virginia’s future economic growth also relies more and more on the high-tech jobs that are created here.”

“HawkEye 360 is adding RF intelligence capabilities for U.S. defense and national security agencies in ways that nobody else is doing,” Congressman Beyer added.

The new HawkEye 360 Advanced Technology and Development Center will house approximately 70 engineering and tech-focused employees. The facility brings its satellite and payload assembly, data engineering and development operations in house, resulting in quicker, more efficient turnaround and delivery for launch. It is also being used to attract high-tech employees. Company officials told Via Satellite that the company, which currently employs about 150 people, is hoping to grow to 200 employees within a year.

Speaking at the event, Serafini called the facility called the facility a major investment for both HawkEye 360 and the local Northern Virginia community. “We invested more than $1 million in this facility and the clean room and we anticipate investing tens of millions of dollars in the local economy in the coming years,” said Serafini

During a tour, HawkEye 360 engineers described the new facility’s 1,000-square foot clean room as a “significant convenience,” giving them the ability to test satellites and make final adjustments to each of its three-satellite “clusters” before sending them into space. The building also houses an electronics lab for advanced RF technology and smallsat manufacturing.

HawkEye 360 anticipates launching its sixth cluster with Rocket Lab from Wallops Island, Virginia before the end of the year. The launch would bring its total constellation to 18 satellites.