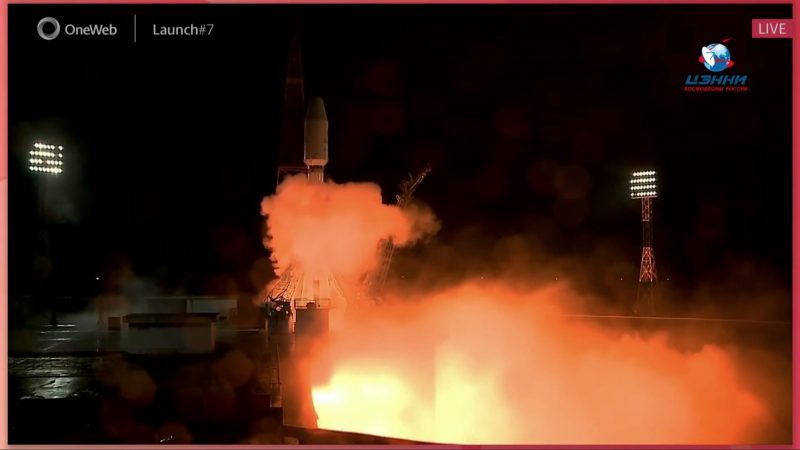 Arianespace launches 36 satellites for OneWeb on May 28. Photo: OneWeb.

Arianespace launched the latest batch of 36 OneWeb satellites on Friday — bringing OneWeb’s constellation to 80% of what is needed to provide initial service.

A Soyuz rocket, operated by Arianespace and its Starsem affiliate, launched the satellites from the Vostochny Cosmodrome in the Russian Far East. The launch took off at 2:38 a.m. May 29 local time, and 1:38 p.m. ET. The satellites were deployed in a series of seven separations, the first one hour and 13 minutes into the mission, and the last three hours and 13 minutes into the mission. OneWeb confirmed signal acquisition on the satellites after the launch. The launch took place after a one-day delay.

With this launch, OneWeb has a constellation of 218 satellites in orbit. This was the fourth launch in OneWeb’s “Five to 50 campaign” to enable its broadband connectivity to reach all regions north of 50 degrees latitude by June 2021.

OneWeb said the “Five to 50” campaign will enable connectivity across the United Kingdom, Alaska, Northern Europe, Greenland, Iceland, the Arctic Seas, and Canada. This service is expected to be switched on before the end of the year and OneWeb intends to make global service available in 2022. OneWeb is targeting 648 satellites for its entire first-generation system.

As OneWeb is getting closer to initial service, it has had a flurry of investments and announcements in the past few weeks. Eutelsat struck a deal to acquire around a 24% stake in the company with a $500 million investment, and Softbank broadened its agreement with the company. In addition, OneWeb acquired its military distribution partner TrustComm, and received its first service contract with Hughes Network Systems for the U.S. Air Force Research Lab (AFRL).