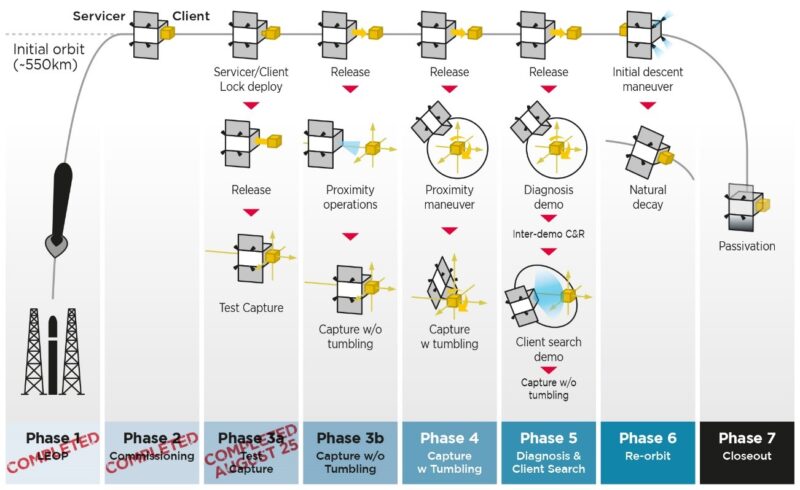 Astroscale successfully demonstrated its ability to capture spacecraft during a key demonstration of its End-of-Life Services by Astroscale-demonstration (ELSA-d) satellite on Wednesday. The long-awaited magnetic capture test represents a significant step forward for the Japanese space company, which is looking to sign up government and private industry customers for its space debris removal service.

Since launching ELSA-d into space this past March, Astroscale has been conducting end-of-life on-orbit servicing demonstrations that were scheduled over a six-month period and licensed by the UK Space Agency.

Wednesday’s demonstration involved releasing the client spacecraft from the servicer and re-capturing it to validate that the magnetic capture system worked.

“A major challenge of debris removal, and on-orbit servicing in general, is docking with or capturing a client object; this test demonstration served as a successful validation of ELSA-d’s ability to dock with a client, such as a defunct satellite,” Astroscale said in its announcement. “During the release and capture period, Astroscale’s Mission Operations and Ground Segment teams checked out and calibrated the rendezvous sensors and verified relevant ground system infrastructure and operational procedures.”

Now that it completed this test, Astroscale will prepare to demonstrate “capture without tumbling,” where the client spacecraft is separated to a greater distance, and the method of rendezvous and docking changes to a reliance on a combination of on-board autonomous software and advanced ground processing of telemetry and commands.

The company expects to complete this next phase in the coming months, followed by final capture demonstrations that involve ELSA-d inspecting the client, withdrawing to simulate a far-range search, and then approaching and recapturing.

“This has been a fantastic first step in validating all the key technologies for rendezvous and proximity operations and capture in space,” Astroscale Founder and CEO Nobu Okada said in a statement. “We are proud to have proven our magnetic capture capabilities and excited to drive on-orbit servicing forward with ELSA-d.”

Surrey Satellite Technology Ltd (SSTL) built ELSA-d and shipped it to Astroscale in 2019. The spacecraft incorporates S-band communications, GPS positioning, a 3-axis control system, and an HD camera to capture operations in orbit on video.