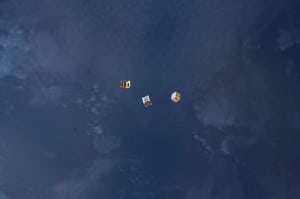 [Via Satellite 03-05-2015] Euroconsult’s newly released small satellite research report projects a total of 510 smallsats to be launched in the next five years — a two-thirds pick up from the average number of these spacecraft orbited in the last decade. The report, titled “Prospects for the Small Satellite Market,” includes research on all small satellites — nanosats, cubesats, microsats and minisats — with a mass between 1 kg and 500 kg that Euroconsult expects will be “realistically” launched between now and 2019. According to the report, the smallsat industry will enjoy a steady pickup across the market, driven by the smallest of spacecraft.

“Growth in the coming years is driven by cubesats and nanosats, as the average per year excluding that mass category (1 kg to 10 kg) is 42 units,” Rachel Villain, a principal advisor at Euroconsult and editor of the report, told Via Satellite.

With the projected average at 100 smallsat launches per year, cubesats and nanosats make up over half the forecasted amount. Minisats are also contributing to the growth for use in operational missions in Earth observation, Earth science, meteorology and space science, particularly in the three regions where satellite launch activity is seeing a strong pickup: Europe, Africa, the Middle East, and Asia outside of the three space powers of this region (Russia, Japan and China). Asia’s space powers, however, will see a slow down as they prepare for a new wave of cubesats, nanosats and constellations post-2020. Meanwhile, launch activity in the U.S. market is expected to remain steady, with the majority of launches across the board — 75 percent — set to be used for government and civil defense agencies.

“Growth in government demand will be stronger than in the commercial world,” said Villain. “Civilian government agencies in established and developing space countries [will] use small satellites for three purposes: operational missions — principally in Earth observation — in-flight technology validation and demonstration, and engineering education. Military agencies have been poor users of smallsat to date, as they tend to go to larger platforms with larger capabilities for operational missions.”

Commercial organizations tend to go to larger satellite platforms as well. Only 130 smallsat launches will be from the commercial world, including a number of smallsat remote sensing constellations of different size and mass from companies like Perseus, Planet Labs, RapidEye 2G, Skybox, and OmniEarth. The 26 per year forecast is still up from the 17 per year in the last decade, but Villain notes that commercial companies have been weak users of smallsats as of now. Globalstar and Orbcomm, for example, have both procured larger and more capable satellites for their upcoming 2G constellations. While Villain and Euroconsult exclude large upcoming commercial constellation projects from the report, such as those announced by OneWeb, and SpaceX , and Leosat, they admit that large constellation projects could represent a “very significant component” of launches in the next five years.

“The proportion of commercial satellites in the next five years (25 percent) will depend on the materialization of a limited number of constellation projects. The two mega-constellation projects announced by OneWeb and SpaceX in association with Google have not been included for launch by 2019,” Villain explained.

The newly announced Leosat constellation, however, is slated for launch just before the end of the decade. While the announcement didn’t make the cut off for the report, Villain believes it, like mega constellations in general, could contribute not only to the number of launches but to what she calls the risk of a “smallsat bubble.”

“Smallsat manufacturing capacity is growing faster than demand for smallsat services, leading to industry consolidation,” said Villain, noting that this has already happened in the U.S. “Mega constellations will definitively be part of the smallsat bubble because their economics is based on smallsat.”

Perhaps due to the larger commercial satellites included in the report, the average launch mass of smallsats has increased, up from a 70 kg average mass in the past five years to 80 kg in the next five. Market growth is also climbing, up 17 percent over the previous five years and with the market value of the future 510 smallsats ringing in at an estimated $7.4 billion, the industry can look to a solid smallsat market for years to come.