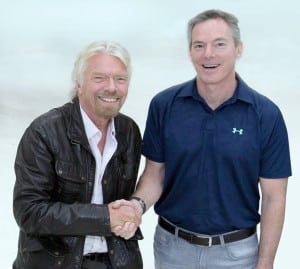 Virgin Group Founder Sir Richard Branson and Qualcomm Executive Chairman Paul Jacobs are the initial investors in the OneWeb constellation and are part of the board of directors. Photo: Virgin

[Via Satellite 01-15-2015] OneWeb, formerly known as WorldVu, announced today its intentions to launch a massive constellation of 648 small satellites to provide broadband and telephony services to the world from Low Earth Orbit (LEO). Greg Wyler, who founded O3b Networks in 2007, started WorldVu in 2012 and is its CEO. The Virgin Group and Qualcomm are initial investors in the gargantuan satellite constellation. Financial details have not been disclosed, but Qualcomm Executive Chairman Paul Jacobs said the company looks forward to helping fund initial technical feasibility work for the satellite system, and Virgin Group Founder Sir Richard Branson touted the significant role Virgin Galactic’s dedicated SmallSat vehicle LauncherOne will play in orbiting the constellation. Both Jacobs and Branson have joined Wyler on OneWeb’s board of directors.

The 648-satellite OneWeb constellation is designed to integrate with mobile networks. It will act as an extension of a mobile operator’s network and it expects to be the equivalent to any terrestrial network. By operating in LEO, the whole system will have more than 8 terabits in terms of total capacity and will have latency of less than 30 milliseconds, according to a high-level Via Satellite source who requested anonymity.

The goal of OneWeb is very similar to O3b, namely to provide connectivity to populations that historically have not had access to broadband and telephony services. Citing 2014 research from the International Telecommunications Union, OneWeb said in a statement that more than half of the world’s population lacks access to broadband. The company seeks to remedy this situation by providing self-installable terminals to users that essentially act as small cells. Through an operator partner’s licensed spectrum, the terminals would emit Wi-Fi, LTE, 3G or 2G, or would support Wi-Fi or LTE using unlicensed spectrum.

“OneWeb is designing a global communications infrastructure that will enable affordable Internet access to the world’s underserved populations,” Wyler said in a statement. “With the spectrum and technology, coupled with strong partners, we look forward to advancing global connectivity.”

Any phone, computer or tablet close within range of the terminal would have access to OneWeb’s network. The company said first responders would also have access for disaster situations, refugee camps and other areas. In a Jan. 15 blog post, Branson highlighted opportunities for e-learning and job creation in previously unconnected areas.

“Imagine the possibilities for the 3 billion people in hard to reach areas who are currently not connected. This project could change lives, transform communities and have a huge positive impact upon the world,” he wrote.

OneWeb’s selection of Virgin Galactic’s air-launched LauncherOne rocket brings a substantial influx in launch demand for the system, for which the first flight remains scheduled for 2016. LauncherOne’s manifest includes launches for Spaceflight Inc., Skybox Imaging, GeoOptics and Planetary Resources. With the addition of OneWeb, Virgin Galactic plans to launch frequently to keep pace with demand.

“We have the biggest order ever for putting satellites into space. By the time our second constellation is developed, the company will have launched more satellites than there currently are in the sky,” Branson wrote.

Speaking at the American Institute of Aeronautics and Astronautics (AIAA) Science and Technology Forum and Exposition (SciTech 2015) on Jan. 9, Virgin Galactic CEO George Whitesides said that SmallSat launching had been seen as a beneficial and complementary source of growth in addition to human spaceflight early on in the company’s development.

“The market for small satellites is projected to grow significantly over the coming years and there is no affordable dedicated American options for those customers who want to control both their launch date and orbit … LauncherOne is designed to be the lowest discreet cost for any American orbital launch vehicle. We are also designing it to be very competitive with international competition on a cost per pound basis,” said Whitesides.

Air-launched from White Knight Two, LauncherOne is a two-stage rocket that uses Liquid Oxygen and Kerosene (LOX/RP-1) pump fed engines and is designed for high-rate manufacturing. Whitesides said Virgin Galactic built two test stands in Mojave capable of testing engines with more than 45,000 kilograms (100,000 pounds) of thrust, and has been actively advancing the company’s engine family. According to Virgin Galactic, LauncherOne can deliver 225 kilograms (500 pounds) to low inclination LEO, or 120 kilograms (265 pounds) to a high-altitude Sun-Synchronous Orbit for less than $10 million per mission.

Mark Holmes contributed to this report.