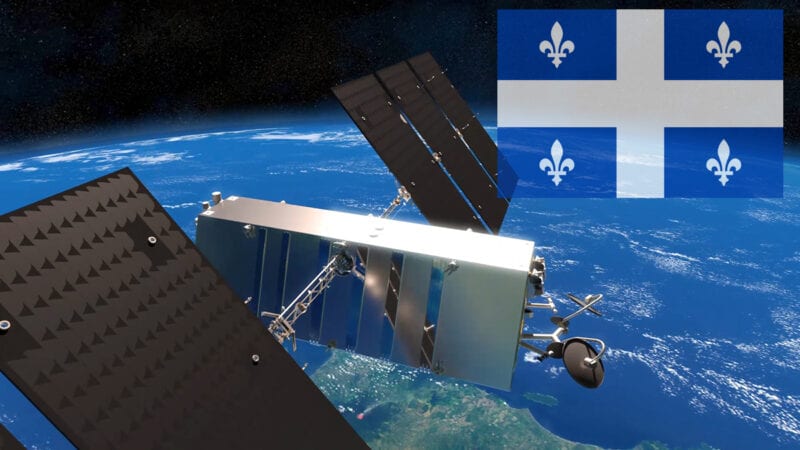 The government of Québec will invest 400 million Canadian dollars ($316 million) in Telesat‘s new Low-Earth Orbit (LEO) constellation, Lightspeed. In return, Canadian satellite operator Telesat will invest CA$1.6 billion into Québec by moving a “significant portion” of Lightspeed manufacturing and operations to the Canadian province, according to the terms of the MoU agreement announced February 18.

Telesat is investing about $5 billion total into its new Lightspeed LEO constellation, and just recently issued a $3 billion manufacturing prime contract to Thales Alenia Space. The initial constellation will be made up of 298 Ka-band satellites to provide global broadband internet service starting in the second half of 2024.  As part of the MoU with Québec, Thales Alenia Space will establish the final manufacturing of the advanced Lightspeed satellites at an assembly, integration, and testing facility in the province and is in discussions with Québec-based partners to plan the project.

Telesat also selected Canadian space technology company MDA to manufacture the phased array antennas that will be incorporated into the Lightspeed satellites. MDA will also manufacture its Lightspeed components in Québec.

“The Telesat project will raise the international profile of Québec engineering and our space industry. It gives us a key position in the new, private-sector space race. This investment will boost our aerospace industry, which has suffered over the last year. Québec is already a leader in the field, but with today’s announcement, we show that we will do what it takes to remain a leader into the future,” Pierre Fitzgibbon, the Québec minister of Economy and Innovation, commented in the release.

In an exclusive Via Satellite interview published to premium subscribers on Thursday, Telesat CEO Dan Goldberg called Lightspeed the biggest undertaking of his career. “Telesat has invested billions and billions of dollars over 50 years in its fleet, but this single project is the biggest in our history … We’re not going to spend $5 billion on a network that isn’t absolutely kick ass.”