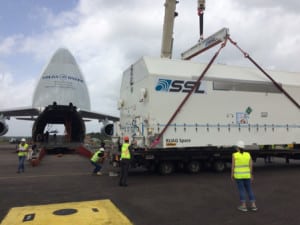 [Via Satellite 02-09-2016] Eutelsat’s next satellite, Eutelsat 65 West A, landed in Kourou, French Guiana on Feb. 6 for an upcoming Arianespace Ariane 5 launch March 9. The 6.5-ton Space Systems Loral (SSL)-built satellite will be located at 65 degrees west, a premier position for the Brazilian TV market, ahead of the 2016 Rio de Janeiro Olympics.

Eutelsat 65 West A has 10 C-band and 24 Ku-band transponders for video and data services, and 24 Ka-band spot beams for broadband connectivity in key regions. The spacecraft’s C-band coverage is designed to enable cross-continental video contribution and distribution. Hughes do Brasil booked the entire Ka-band high throughput payload for broadband services. Based on the SSL-1300 platform, the satellite is designed to provide approximately 16-kW of power at end of life.

Eutelsat 65 West A is one of three satellites from Eutelsat launching between this year and last year to bolster its coverage of the Americas. Eutelsat 115 West B launched last year, and Eutelsat 117 West B is scheduled to launch later this year.