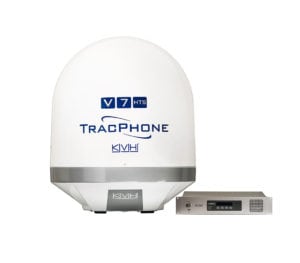 KVH Industries has announced the launch of its next-generation maritime broadband network, joined by service partner Intelsat. Slated for commercial availability in November, KVH expects its high-speed overlay to its current mini-Very Small Aperture Terminal (VSAT) BroadbandSM service to triple, and in some cases increase by a multiple of six, the data speeds for its maritime customers.

At launch, KVH will offer speeds as fast as 10 Mbps to each terminal. Each Intelsat Epic satellite has 25 to 60 Gbps of capacity, which is expected to deliver a major performance enhancement for KVH subscribers. KVH’s enhanced service is designed to improve business productivity in the commercial maritime world, and enrich the onboard experience for superyachts and recreational boats.

The new mini-VSAT broadband network will include southern Atlantic and southern Indian Ocean capacity, which is the primary driver for an expansion of KVH’s Ku-band coverage by 25 million square miles.

KVH also recently unveiled a new 60 cm marine satellite antenna system. According to the company, the TracPhone V7-HTS achieves data download speeds of up to 10 Mbps, and is fast enough to enable the streaming of High Definition (HD)-quality content at sea.

In addition, to further meet the demands of increased data usage at sea, KVH is offering the TracPhone V7-HTS with new hybrid airtime plans that deliver a free, lower-speed unlimited use data channel that runs at the same time as the high-speed data channel.

For the commercial maritime market, KVH expects the TracPhone V7-HTS to enable merchant fleets to take advantage of cloud-based software programs, remote system monitoring, and data analytics in the pursuit of digitalization.