Throughout SATELLITE 2017, a major point heralded by speakers was the need to cooperate to ensure the satellite industry’s survival in the coming years. In that respect, Tuesday’s closing general session, which featured an international gamut of satellite CEOs, had a much different feel. Though cordial, the tension on stage was palpable as the speakers clashed on different ways to address global connectivity and rapidly encroaching competition from the mobile market.

For Tom Choi, CEO of Asia Broadcast Satellite (ABS), OneWeb’s focus on Low-Earth Orbit (LEO) seems like folly. Rather than deploying as many spot beams as possible across the planet and “[hoping] customers will come,” Choi believes a more conservative, selective approach is the best way to ensure profitability.

“That LEO network is traversing around the Earth every two hours … A third of the time it’s going to be above or below the Arctic circle, so you’re throwing away a third of your capacity immediately,” he said. “Seventy percent of the Earth is water. There are no people there.”

OneWeb CEO Eric Beranger was quick to object, highlighting his company’s lofty goal of bringing connectivity to the 4 billion people on the dark side of the digital divide. Due to backing from Softbank, which includes $1.7 billion raised in equity, Beranger said he is confident that OneWeb can achieve deployment of a global LEO system that provides seamless global coverage and also ensures a return on investment. “Once OneWeb is there, anybody anywhere on earth or on the oceans or in the air can have exactly the same experience using broadband internet as if we were sitting in an office or at home,” he said, citing the low latency of LEO constellations as a game-changer.

Hughes President Pradman Kaul said his company is taking a more incremental approach more in line with Choi’s beliefs. “We launched Brazil into commercial [broadband] service about six months ago and have about 40,000 subscribers. We are also working hard in Mexico,” he said. “We want to blanket the Americas first and then we’ll go into other parts of the world.”

Kaul also intends to bring connectivity to India, but cited regulatory hassles there as a hindrance. Still, he noted that the low latency of OneWeb’s constellation is important to consider. “Having low latency will allow us to provide applications that make sense which we can’t provide today with GEOs,” he said.

Khalid Balkheyour, president and CEO of Arabsat, and Masood Sharif Mahmood, CEO of Yahsat, had similarly moderate mindsets. “We are considering looking to low orbit satellites, either by investment or by partnering with some existing pioneers … I think it will have a future. I expect some market share will be given to the LEOs and taken from the GEOs. We don’t want to miss the boat,” Belkheyour said. “Before the end of the year we’ll make a strategic decision.”

“There is a chance for this to work,” Mahmood said in agreement. “When, in which form and at which cost — if you ask each person you’ll get a different answer.” 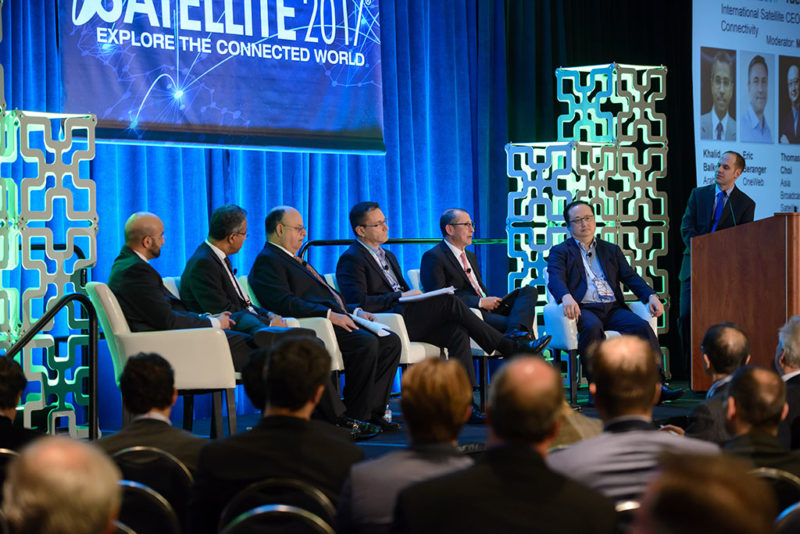 Choi remained unconvinced, arguing that the lack of infrastructure in developing countries and rural areas will make it difficult to serve consumers there. “Those people are challenging to serve because their income levels are very low and the availability of electrical power is almost non-existent. There’s a reason why people are not connected,” he said.

Furthermore, Choi warned that mobile operators pushing 5G will become a very real competitive threat, stating that the reason Iridium and Globalstar went bankrupt in previous decades was because they didn’t foresee what the mobile operators would do. “I’m just worried about what our industry is doing today. Maybe we’re charging ahead, throwing so much money into HTS excitement but not understanding what is really going to happen on the ground,” he said. “In the 90s, investors lost over $10 billion on random global satellite initiatives … I think we’re doing the same thing again 20 years later.”

Hispasat CEO Carlos Espinos Gomez was also wary, but thinks the satellite industry would have a better chance by focusing energy on places where there are no other connectivity solutions. “We think that satellite is not the right technology to compete against fiber optics or 5G; we have to become complementary. To conciliate our position will take some time,” he said.

Kaul spoke similarly: “We don’t expect to compete with 5G. Our approach is to find underserved homes and serve them. For example, in the U.S. there are 18 million households that don’t have fiber or cable and will not have it for at least five to six years. Our strategy is to serve those guys,” he said.

Staying firmly in the middle of the road, Balkheyour said he doesn’t think there is any disagreement on the need for data connectivity but stressed caution moving forward. “What bothers me is that there are too many players coming into the market, and they all have a good business case,” he said.

Ultimately, for Mahmood, a debate on the merits of LEO global coverage versus more focused GEO coverage is entirely the wrong conversation to have. He stressed that profitability remains paramount. “Most of the conversations I’m hearing define the satellite industry and operators as an infrastructure play. To me, looking at lessons from other sectors, at the end you need to make a return,” he said. “That’s why Yahsat’s focus has been to make sure we have the distribution rights and the bells and whistles on top of our basic connectivity.”