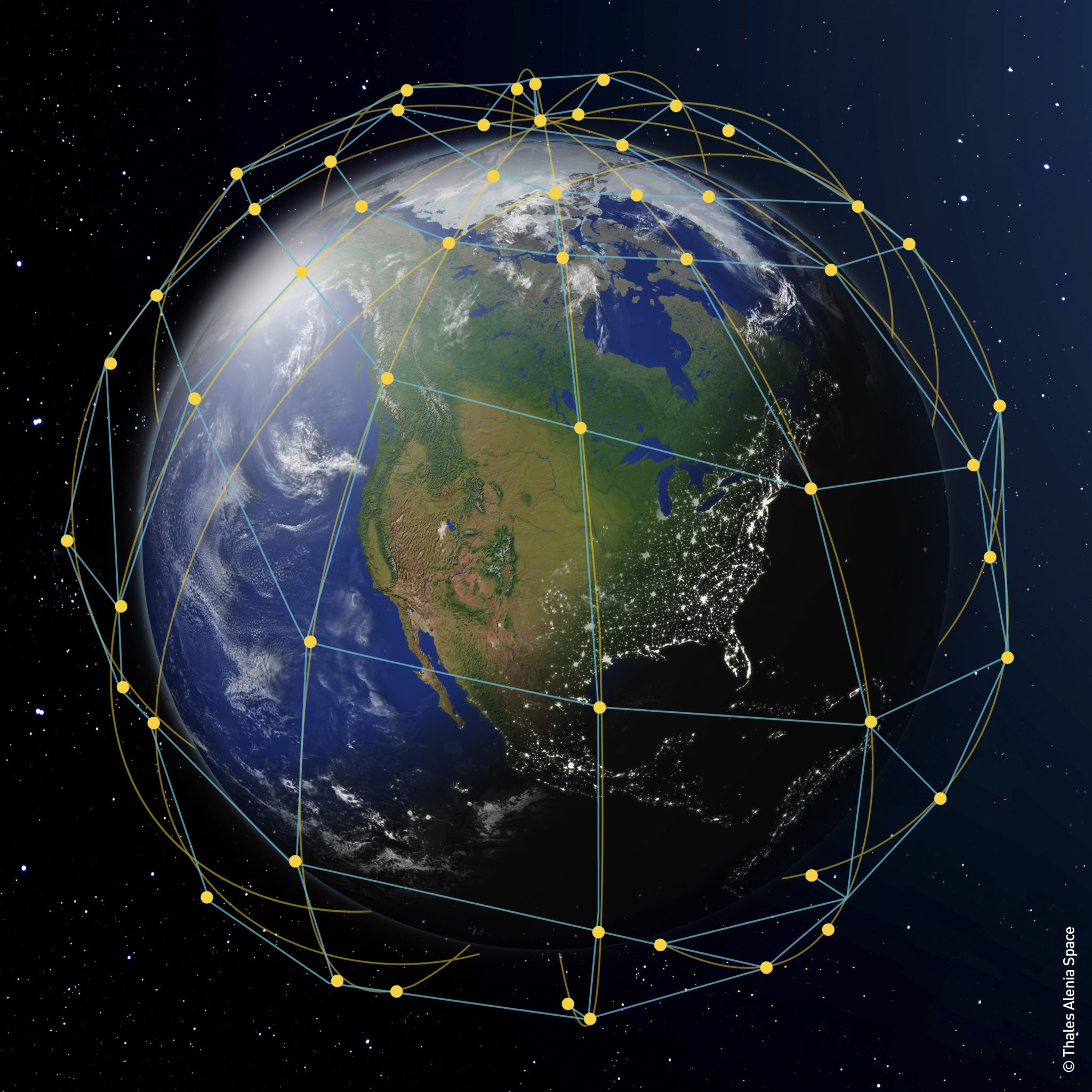 A satellite constellation depiction. Some elements of this image furnished by NASA. Photo: Thales Alenia Space

[Via Satellite 10-19-2016] Upcoming satellite operator LeoSat is in discussion with eight geosynchronous satellite operators on investing in the company’s future high capacity Low Earth Orbit (LEO) system. The talks could lead to an arrangement whereby an established Fixed Satellite Service (FSS) provider would have shared access to the LeoSat constellation once in orbit, Mark Rigolle, CEO of LeoSat, told Via Satellite.

“We are talking to some eight strategic investors, FSS operators, who are in various stages of due diligence,” Rigolle said, adding that it took nine months for SES before that operator made its investment in O3b Networks. Rigolle is a former CFO and CEO of O3b, and guided the Medium Earth Orbit (MEO) operator to raising $1.2 billion back in the late 2000s.

Rigolle estimates that LeoSat will require $3.5 to $3.6 billion for its planned constellation of high throughput, low latency satellites. He said the Round A funding the company is currently undergoing will be for equity.

An FSS partnership with LeoSat could continue a trend growing all the more evident among GEO players as they seek to differentiate their services. Last year Intelsat partnered with OneWeb for combined GEO/LEO services, of which Gogo is the inaugural customer; SES this year moved to take 100 percent ownership of O3b, and Telesat procured two demonstration LEO spacecraft to trailblaze a potential constellation of 150 to 200 small satellites.

“The general feeling of malaise in the sector, because of the feeling that there is excess capacity and price wars, has lead to a situation whereby everybody seems more interested in looking at a broad span of strategic options, and have therefore engaged with us,” Rigolle observed.

LeoSat recently signed a Phase B contract with satellite manufacturer Thales Alenia Space to detail the design forged during a feasibility study last year. During Phase B, Rigolle said the companies will be specifying the constellation down to the sub-component level, deciding who is going to be building which components, what will be done in house at Thales Alenia Space, what will be outsourced, and who the subcontractors will be. He estimated that production could be set up within a year, and long lead items ordered.

In June, LeoSat announced the National Science Foundation (NSF) would be the company’s first customer, leveraging the future constellation for broadband data communications at the South Pole and throughout the Antarctic. Rigolle said NSF, as a part of the U.S. government, cannot sign true contracts until LeoSat has assets in orbit. The agency plans to make use of LeoSat’s first two demonstration satellites, which are planned for launch in 2018. Along with supporting this inaugural customer, Rigolle said the demonstration satellites will validate technology that investors have expressed skepticism about.

LeoSat’s satellites are designed on the same platform used for Iridium Next and O3b, but with a payload power of 2.4 kilowatts, a payload mass of 430 kilograms, and four solar panels to power more throughput. Rigolle estimated the mass of each spacecraft to be approximately 1.25 tons per satellite. The main technology to demonstrate will be inter-satellite laser links; something Rigolle said has caused potential investors anxiety. He said the technology does not truly need to be demonstrated, citing examples such as the European Data Relay Satellite (EDRS) program, but that proving the technology in space will give investors greater confidence.

“The complexity of this is something that makes laser-people who know this technology very comfortable that it can be done, but investors would like to see us do it,” he explained.

Rigolle said that polar orbits pooling capacity uselessly over the largely empty polar regions of the world — a frequently cited qualm of prospective LEO ideas — is not a challenge either. LeoSat envisions having six planes of satellites moving north to south, but rather than congregating over the poles and remaining idle, Rigolle said each spacecraft would relay data from other spacecraft to optimize fill rates across the fleet.

“If our satellites that are over the poles don’t see any human activity, so there is no up and down traffic being generated, we are going to use those satellites by priority to get traffic from New York to Tokyo, for instance. That would go over the North Pole. If you want to get traffic from Australia to Rio de Janeiro, it will go over Antarctica. We won’t have such a thing as an asset that is wasting in space that is not contributing to revenue generation. If it’s not up-down, then it’s across,” he said.

For the ground terminals, Rigolle said LeoSat benefits from the advances in Ka-band modems and antennas made by O3b and others, and that for the types of customers LeoSat is pursuing, a larger upfront investment in ground equipment will be justified by the large amounts of capacity they would use. The company anticipates most business will come from high Gross Domestic Product (GDP) regions. Flat panel antennas could further expand the market for LeoSat, but parabolic solutions will not be a barrier, he said.

Rigolle estimates that LeoSat will probably raise just over a billion dollars through equity, and raise the rest through debt. He said the company is in conversation with Export Credit Agencies (ECAs), notably Ex-Im Bank in the U.S. and Coface in France, to discuss supporting the project. LeoSat intends to begin launching its full fleet in 2020. Rigolle said the satellites would have a 10-year life span, and that the operator would need a minimum of 54 to achieve full global coverage. LeoSat plans to build a total constellation of 78 to 108 satellites, with the final number being determined by demand. Because the satellites are to orbit at 1,400 km, he added that they could well exceed their life expectancy, similar to Iridium’s current fleet, thanks to reduced radiation exposure in LEO compared to higher orbits.