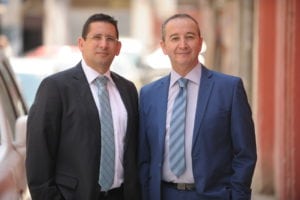 [Via Satellite 07-26-2016] Small satellite company Sky and Space Global is planning a network of nanosatellites for narrowband communications that it expects will cost $160 million or less to complete in total. The company, located in the U.K., Israel and Australia, has fully funded the first three satellites to precede an initial constellation of 200 nanosatellites. Coined the “Three Diamonds,” the nanosatellites are scheduled to launch as a rideshare aboard a Polar Satellite Launch Vehicle (PSLV) from the Indian Space Research Organization (ISRO) in the second quarter of 2017.

The pilot satellites are to determine the final characteristics of Sky and Space Global’s operational satellites, which are scheduled to begin launching in 2018 via Virgin Galactic’s LauncherOne. Sky and Space Global’s goal is to field a constellation that will eventually become global for low cost telecommunications services such as voice, instant messaging and data forwarding.

Meir Moalem, CEO of Sky and Space Global, told Via Satellite that the company believes nanosatellite technology has progressed to the point that an entire constellation can be launched for a very low cost — as much, in some cases, as the manufacture or launch of a single geostationary communications satellite.

“We estimate — and it’s a very precise estimation — that the full constellation of the 200 nanosatellites will cost somewhere between $120 and $160 million,” he said. “That is for the production, launch and operation of the constellation itself.”

Though adding that Sky and Space Global does not expect to have the same capabilities as a large, geostationary spacecraft, Moalem said he is convinced the technology for small satellites has matured enough to make such concepts possible. Using the cost of a nanosatellite for educational purposes as a guidepost, Moalem estimated that spacecraft hardware should cost around $500,000 or less, and launch should be in the range of $200,00 to $250,000.

“The only new thing — since the hardware is composed of space-proven nanosatellites components — that we bring to the table is our network management software. We are trying to build an autonomous constellation that manages itself in space through the satellites themselves, with as small as possible need for any interference from ground stations. Everything will be done from the network itself,” he added.

Moalem said the initial constellation will focus on equatorial coverage from 15 degrees south latitude to 15 degrees north. Once the 200 satellites are running and generating revenue, the company intends to expand to field a global system, providing services not dissimilar to Iridium, Globalstar and Inmarsat.

“In less than $1 million, you can put a very advanced, very complicated nanosatellite in space. When you do it in bulk, the numbers drop further. We estimate anywhere between half a million and one million dollars for putting a satellite in space,” he said.

Sky and Space Global is already marketing its services to customers, and one, Sat-Space Africa of Mauritius, has entered a binding letter of intent to use the Low Earth Orbit (LEO) network, including whatever capacity the pilot satellites can offer. The to-be LEO operator anticipates a combination of future revenues and rising company value will enable the company to raise the remaining funds necessary to complete the constellation. Earlier this year the company raised $4.5 million in capital and began trading on the Australian Securities Exchange. Moalem said the first three satellites and the demonstration are fully funded, and that the company will seek to raise the additional necessary capital over the coming years.

Through Ofcom, the United Kingdom’s communications regulatory body, Sky and Space Global gained approval to use S-band spectrum from the International Telecommunications Union (ITU). Moalem said the company is considering S-band and L-band for the final constellation, acknowledging that seeking new spectrum is a challenge with how crowded the market has become. He said Sky and Space Global plans to use software-defined radios on the satellites so they can change frequencies in different areas if necessary.

Regarding the user equipment for the SmallSat system, Moalem said Sky and Space Global has not revealed what it will offer yet, but is endeavoring to provide products that are significantly low cost.

“Since we are targeting a very specific market, and we want affordable prices, we also need to have affordable end user devices so that people in Africa can afford to use our service without investing hundreds of dollars in an end user device. We are exploring currently some possibilities anywhere between a dedicated satellite phone up to connected devices, or even a hotspot device that will enable communications to people,” he said.

Once the constellation is operational, Moalem said Sky and Space Global intends to regularly refresh with new satellites even before the old ones die in order to keep pace with technology developments on the ground. While the satellites will be built with a design life of five to seven years, he said the company plans to deorbit them after four. On an annual basis, the company wants to shed 25 percent of the constellation, replacing 50 satellites with new iterations.

“That way we can keep the constellation at any time at the front of technology, each time replacing with a new generation of satellites that has new capabilities, more advanced payloads, newer CPU, solar panels, etc., because everything is moving ahead really quickly. Look at what is happening in smartphones: every few months you get a new generation. It is kind of the same with NewSpace companies. If you look at what’s happening with nanosatellites today, components keep getting better and better at an exponential pace, so we try to take advantage of that,” he said.

Moalem said Sky and Space Global has not yet determined how many satellites will launch per mission. Virgin Galactic is the sole launch provider the company has contracted with beyond the initial PSLV mission. Moalem estimated it would be tens of satellites per launch — possibly 25 to 50 — but added this would depend on the size and mass of the operational satellites, which will be determined following analysis of the “three diamonds.”