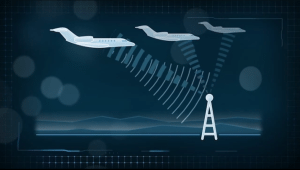 [Via Satellite 04-01-2016] In-Flight Connectivity (IFC) provider newcomer SmartSky Networks, a company that claims its Air-to-Ground (ATG) network is able to deliver more than 10 times competitor’s speeds, is taking the business aviation industry by storm. With its network set to become operational later this year, the company has already set its sights on entering the commercial market.

SmartSky President Ryan Stone told Via Satellite the company is jumping into marketing to the airline industry, beginning with exhibitions at the Aircraft Interiors Expo next week and the Global Connected Aircraft Summit in June, but that the business aviation market was a natural starting place for the company.

“Business aviation is … a better starting point because it’s a more dynamic, fragmented marketplace where the best solution can win on its merits, rather than also having to account for the timing game embedded within the longer term contracts and upgrade cycles of the commercial aircraft arena,” said Stone. He also believes that many business aviation users are ready to make immediate use of several features the company is bringing to bear, such as the ability to conduct two-way live calling — a service are not currently allowed on major commercial airlines.

He points to the “overwhelming market response” the company has had to its “Early Bird” program as validation of its offerings. SmartSky has already forged several Early Bird agreements with business aviation companies across the industry. This includes private aircraft management company Davinci Jets and a newly announced contract with Clay Lacy Aviation to develop a Supplemental Type Certificate (STC) for SmartSky hardware on four Gulfstream models.

“Bombardier WAVE, which is a worldwide service, is currently only offered on our larger global aircraft. SmartSky will soon be available on all Bombardier aircraft and is intended for customers whose mission profiles are U.S.-based,” explained Kirk Schiebelhut, manager of business and product development at Bombardier Business Aircraft Service Centers, pointing to the Internet connection speeds as a main selling point.

Stone says the company can deliver upped speeds, bi-directional high bandwidth, and low latency by using 60MHz spectrum on an ATG platform and 4G beam-forming technology, which delivers a signal that locks onto an aircraft, promising to provide unrestricted access to the Web.

“The main technical reason for high bandwidth is the large amount of spectrum used (60 MHz) relative to the current industry standard of 3 MHz. With 20 times more spectrum, the ‘pipe size’ is now large enough to deliver 4G performance,” Stone said. “The capacity is further enhanced by using beams that target each aircraft, rather than the wider shared signal used by older 3G systems.”

Stone claims that by the time SmartSky achieves complete coverage over the contiguous U.S. next year, the system will have nearly 20,000 beams. Moreover, as the company needs more capacity, it can add more beams to enable the system to scale as demand grows, or as air traffic patterns change.

“The low latency is due to a combination of factors including using a ground-based system rather than satellites, which avoids the long travel time for a signal to go into geosynchronous orbit and back, coupled with a modern 4G-based private network design that uses a virtualized evolved packet core architecture for high efficiency and security,” he explained.

Though SmartSky touts ATG as having many advantages over satellite, Stone said the company is not opposed to working with satellite companies completely. The other two major ATG programs — Gogo and Inmarsat — each leverage or plan to leverage hybrid satellite and ATG systems.

Stone says the SmartSky network can enable better operational connectivity for business and commercial aircraft in the cockpit as well and services such as aircraft health monitoring. Bombardier said customers are likely to take advantage of this.

“The SmartSky network is designed to provide passenger connectivity, but also will provide significant functionality to the cockpit and to aircraft monitoring. Flight crews may access systems updates and related support on their personal devices, as well as useful informational services such as weather updates,” said Schiebelhut, noting that SmartSky 4G is not certified for in-flight safety services.

Going forward, Stone says that the company will focus on taking on even more partners to spread its network, in both the business and commercial markets.

“Similar to our business aviation strategy, we are forging partnerships with entrenched commercial airline-focused companies in the [In-Flight Entertainment and Connectivity] IFEC space who understand the value we bring to the table, how our solutions complement theirs, and why next-generation ATG is an important part of the mix going forward,” said Stone, who claims that the system can handle both business and commercial traffic.

SmartSky Networks is concentrating on launching the network first within U.S. airspace, which should see full coverage by mid-2017, and then internationally.

“This entails executing on various aspects of our business like rolling out and operating the network, working with our partners to develop STCs and update [Type Certificates] TCs for a wide range of aircraft makes/models, and educating aircraft operators, owners, and passengers that a new high speed in-flight connectivity solution is taking flight soon,” he said.