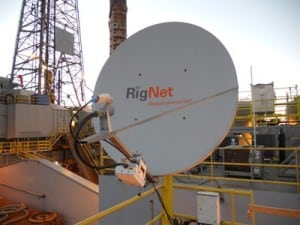 [Via Satellite 03-02-2016] A multimillion-dollar contract dispute with a customer in Australia is adding difficulty to an already challenging market for RigNet. The company incurred negative income adjustments totaling $15.6 million due to a disagreement with a customer working with the company’s Telecom Systems Integration (TSI) business.

RigNet provides telecommunications services to the energy sector, mainly for oil and gas facilities in remote locations around the world. With the cost of oil declining steadily throughout 2015 and into 2016, the company joined others in the energy market that are experiencing slowdowns in business.

Marty Jimmerson, formerly CFO, now interim CEO and president of RigNet, said the project has been disappointingly trying, but that RigNet will see it through to completion.

“We remain committed to finishing this project, which we currently believe to be in the final stages, with estimated completion in the second quarter of 2016. Our dispute is with a customer that we have served extremely well in the past and in fact are commencing work with on a similar project, making the current situation even more disappointing. We have committed significant time and resources on this contract dispute, and we remain committed to pursuing all avenues available to us to reach a satisfactory conclusion on this matter with no further negative impact to RigNet,” he said March 2 during the company’s Q4 2015 conference call.

Chip Schneider, SVP and CFO at RigNet, said the TSI project was conveyed to RigNet as part of Inmarsat’s former enterprise energy business. RigNet acquired the business division in 2014 for $25 million, gaining the bulk of Inmarsat’s energy broadband assets with the exception of its Russia business. Additionally, RigNet became a Value Added Reseller (VAR) for the first five years of Global Xpress (GX) capacity.

Jimmerson declined to comment much on the TSI dispute beyond initial remarks because it is a pending legal matter. RigNet estimates the troubled project still has $2.2 million in remaining project completion costs. RigNet’s managed services revenue declined compared to Q3 by 6.2 percent to $57.1 million, and TSI revenue, again excluding the embattled project, decreased 14.5 percent to $4.7 million.

Jimmerson said rig stacking and scrapping, along with lower operator revenues, to a lesser extent, contributed to the year-over-year decline. He said RigNet’s revenue and profitability are more closely tied to offshore drilling specifically, and that the company was serving more than 200 rigs despite the drop off. He estimated RigNet holds a 32.3 percent market share in offshore rigs, down only slightly from 33.3 percent in the third quarter. Still, more rigs are expected to shut down as the year progresses.

“Since Oct. 1, 2014, we have been notified directly through customers or through public announcements that 63 offshore drilling rigs we serve will be cold stacked or scrapped. By the end of the fourth quarter 2015, we had stopped service on a total of 57 of these 63 rigs. This leaves another six offshore rigs that we expect will be leaving service during 2016. We expect that there will be additional rigs removed from service through 2017,” said Jimmerson.

RigNet did gain new business during the quarter, including 10 rigs, maritime vessels and a Floating Production Storage and Offloading (FPSO) facility. Jimmerson said he expects the oil and gas market downturn will also have some positive results, mainly that drilling companies are more inclined to shelve old rigs rather than their newer counterparts. New rigs have much more technological sophistication, making them more in need of telecommunications services.

“We will also use this energy down cycle as an opportunity to move swiftly and utilize our core competencies to pursue other remote communications sites that align with our capital discipline, and leverage our global presence, network infrastructure, employee skills, and financial flexibility,” he added.

Beyond the TSI conflict, RigNet suffered other financial challenges during the quarter, including a $1.7 million impairment of property, plant and equipment in North American land operations, and $1 million of executive departure costs, as former CEO Mark Slaughter left the company. In North American land operations, RigNet recorded $12.7 million in impairment to goodwill and intangibles in the full year, as well as $7.4 million of restructuring charges related to a series of resource reallocation and headcount reductions implemented in connection with the decline in oil and gas activity.

Though admitting RigNet must weather the current market conditions with longanimity, Jimmerson said he continues to see customers who do leverage the company’s services demanding more rather than less. Operational efficiencies and greater safety requirements continue to spur demand for more data-intensive services.

“Looking forward, although our visibility is limited, we expect the current oil and gas downturn to persist through at least 2016,” he said. “We do see a few signs indicating that our rate of topline decline in our managed services business should abate as we move closer to the bottom of this cycle.”