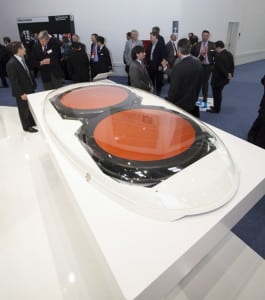 [Via Satellite 11-06-2015] An elated Gogo CEO Michael Small told analysts, investors and journalists during the company’s third quarter conference call Thursday that the In-Flight Connectivity (IFC) giant’s next generation 2KU broadband service is producing connection speeds of more than 12 Mbps during tests on its flying Boeing 737 airborne lab. Gogo is coming off a third quarter where total revenue increased to $126.4 million, up 22 percent from the same period in 2014.

Small said that, based on the third quarter results, the company is raising its 2015 Earnings Before Interest, Taxes, Depreciation and Amortization (EBITDA) to $30-35 million. Gogo installed Internet on 114 commercial aircraft and ended the quarter with 2,312 commercial aircraft online in North America.

But the real news is the Gogo chief executive’s prediction for a very bright future with 2KU. AeroMexico is now flying with 2kU on its first 737, Virgin Atlantic with its first Airbus A340, and Delta has committed to upgrading 250 aircraft to 2KU, according to Small.

“Over the past two months we have been flight testing 2KU extensively, [and] the flight tests have surpassed our expectations. We are pleased to report that we have consistently seen speed tests above 12 megabits per second for the device even with simultaneous streaming on more than 40 devices,” said Small. “In addition to connectivity, the 2KU antenna enables live television programming, which has worked impressively on our test airplane. Because of its proprietary electromechanical phased array antenna design, 2KU has superior global coverage and dramatically lower bandwidth costs when compared to any other global solution whether Ku or Ka.”

Small also addressed how 2KU would handle capacity. While the flight testing has shown the ability to provide 12 Mbps in-flight speeds, capacity is still an issue in situations where 20 to 30 aircraft with 20 to 30 users in each cabin must share the same spot beam. Gogo’s CEO believes 2KU has enough capacity to address this as well.

“With access to more than 180 Ku-band satellites, our operators get access to ample and flexible capacity in addition to great coverage,” said Small. “Regional Ka band solutions only cover about 20 percent of our Ku coverage area and have no redundancy. There are simply not enough Ka satellites now or for the foreseeable future to meet the needs of global aviation.”

Gogo also has plans to take business aviation connectivity into the next generation within the next two years. By 2017, Gogo Biz 4G will be available for business jets, he said.

“We announced Gogo Biz 4G for delivery by early 2017. We expect the server router and 10 Mbps connectivity solution in a box to be very compelling for larger private jets,” said Small, adding that Gogo is focused on penetrating the North American market where 15,000 jets currently do not feature broadband connectivity.

The other major goal for Gogo with 2KU is to work with Boeing and Airbus to achieve line-fit status for its next generation Ku solution. Small knows the challenges that exist, such as the radome size required for the unique 2KU antenna configuration, but feels the big two air framers are slowly moving toward line fit status across all major platforms.

“We have certainly had line fit for many years in [Business Aircraft] BA. It is a long process to get line fit for the very clear reason that neither Airbus nor Boeing is going to delay the delivery of an aircraft because one of their vendors lets them down. We are deeply in that process with both Airbus and Boeing with increasing enthusiasm with both OEMs. 2KU is in line fit for all the major aircraft types, so that’s going to happen,” said Small.