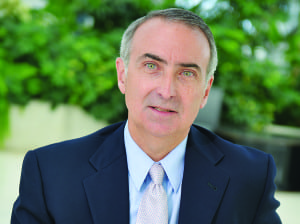 [Via Satellite 05-01-2015] Upcoming satellites both near term and long term are Intelsat’s number one focus, according to recently appointed CEO Stephen Spengler. With three satellites expected to launch during the next 12 months, including the first of the high throughput EpicNG series, Spengler said on the company’s first quarter 2015 earnings call that among Intelsat’s many objectives, orbiting new spacecraft is its primary goal.

“Advancing our satellite programs continues to be our highest priority as we seek to achieve long term growth. I’m pleased to report that our schedule for the five launches planned in 2015 and 2016 is unchanged. We expect to launch Intelsat 34 in the third quarter, and place it into service by early 2016. Both Intelsat 31 and Intelsat 29e remain scheduled to launch in the first quarter of 2016. [Intelsat] 31 should enter service in the second quarter of 2016, and [Intelsat] 29e should enter service by mid-year 2016,” he said.

Currently, Intelsat has 12 satellite projects underway in concept, design and manufacturing stages. All are estimated to launch and be in service by 2020. Arianespace won a contract to launch Intelsat 34, which will bolster media applications in South America and mobility services over the North Atlantic, as well as the first EpicNG satellite, Intelsat 29e. International Launch Services (ILS) is contracted to orbit Intelsat 31, for which DirecTV Latin America is the primary customer, on a Proton rocket.

Along with the 12 satellites planned, Intelsat has two custom payloads being built on third-party satellites: Intelsat 32e and Intelsat 38. Neither requires capital expenditure from the company. Intelsat 32e is scheduled to launch in the first half of 2016, while Intelsat 38 is anticipated for 2017. Spengler suggested more collaborative satellite projects like Intelsat 38 — a joint project between the operator and Azercosmos — would be of interest in the future.

“There are opportunities where we may want to try to extend revenues with customers or help customers grow at a particular location, and its also a situation where we may have orbital rights, a partner may have orbital rights, and so together we can optimize the development of a particular slot, and share that slot and develop capabilities on a joint satellite, for instance, to serve each of our respective customers,” he said, adding that “those kinds of projects are in the pipeline and we are looking at other opportunities to do that.”

Intelsat views these opportunities as a potential method for capturing the most value from an orbital slot. The Intelsat 38/Azerspace 2 is being designed to serve Direct-to-Home (DTH) and network services customers for Intelsat, and DTH, government and network services for Azercosmos across Central and Eastern Europe, Asia and Africa.

During Q1 of 2015, Intelsat won a contract to transition a major Latin American customer, Compania Anonima Nacional Telefonos de Venezuela (CANTV), over to Intelsat 29e. The multi-year, multi-transponder renewal will migrate services from Intelsat 1R to the High Throughput Satellite (HTS), supporting cellular backhaul, enterprise networks, government and other services. Airbus Defence and Space is also shifting to EpicNG. Other new business included an increased commitment from Sentech, a South African telco and broadcaster for capacity on Intelsat 20, a renewal and expansion of services from BT on five satellites, and an increase in North American teleport services from Discovery Communications.

Intelsat brought in revenue of $602 million for the quarter, a decline of 4 percent compared to Q1 of 2014. Network services decreased by 5 percent compared to Q1, government decreased by 13 percent, and media rose by 1 percent. As of March 31, 2015, the company’s average fill rate for its approximately 2,200 station-kept transponders was 75 percent, down from 77 percent at the end of the first quarter of 2014.

Despite these declines, analysts largely looked up at the quarter. In an April 30 research note, Jeffries Equity Analyst Giles Thorne wrote that “after a period of hapless turmoil, Intelsat has delivered solid results with clear evidence of stabilization.” Likewise UBS Analyst Batya Levi wrote today “we expect revenue to decline ~4 percent and EBITDA by ~6 percent in 2015, slightly improve in 2016, before returning to growth in 2017 as new capacity comes into service.”

Regarding the international distribution of television channels and media content, Spengler said there is still “quite a bit of HD to build out in various marketplaces,” and that demand is relatively strong for these services. He anticipates that, within North America, linear distribution to cable head-ends will remain strong against Over-The-Top (OTT) alternatives for a long while, though this trend is developing, and that 4K is still a couple years away from growth and implementation in the broader network.