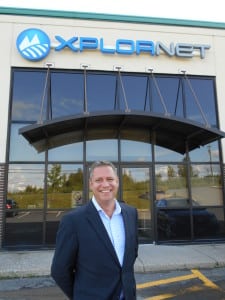 [Via Satellite 10-02-2014] Xplornet, an Internet Service Provider (ISP) dedicated to providing connectivity in rural Canada, has ramped up the satellite side of its business in order to cover the entire country. Earlier this year the company signed lifetime contracts for all the residential Canadian capacity on the ViaSat 2 and EchoStar 19 satellites to be launched in 2016. With this new high throughput capacity, Xplornet will seek to provide initial broadband speeds of 25 Mbps to all of rural Canada.

“When you look at the average broadband package in rural Canada right now, the highest on average speed that a rural Canadian can receive is around 10 Mbps. Our commitment is to get rural Canadians on par with what urban Canadians can experience,” Chris Johnston, executive vice president of marketing at Xplornet, told Via Satellite.

According to Xplornet, of the 2.5 million un-cabled dwelling places in rural Canada, the number without any form of connectivity hovers around 27 percent. The country’s vast landscape makes it challenging to reach rural citizens by terrestrial means. To serve the entire populace, Xplornet uses a hybrid approach, combining terrestrial connectivity with satellite.

He said satellite also provides a level of redundancy for customers where fixed wireless is unfeasible. The decision to bulk up on capacity came as the beams purchased on ViaSat 1 and EchoStar 17 will eventually become capacity constrained due to strong demand. The Hughes contract for Echostar 19 capacity, worth more than $200 million, comes with satellite gateways, operational and support services and consumer user terminals. Similarly, the ViaSat contract for ViaSat 2 capacity, worth up to $275 million, includes gateway stations, ground equipment, network operations, annual network maintenance, and subscriber terminals. Johnston said it is not inconceivable for Xplornet to reach as many as one out of every four households in rural Canada. If the new capacity brings in more customers than anticipated, the company could look to the market again.

“If we find ourselves in a situation where demand is outstripping supply, that will be the point where we have a discussion about expanding satellite coverage with new satellites in space. We aren’t at that point yet, but we haven’t ruled it out that there will be a point of inflection at some point following 2016,” he said.

Looking beyond 2016, Xplornet plans to take broadband speeds even higher. The company is planning on prioritizing fixed wireless over satellite in certain locations as well as pricing variable use effectively in order to quadruple the speed of service within a year of both satellites launching. The improved capabilities of High Throughput Satellites (HTS) give the company confidence in reaching these goals.

“Xplornet’s next generation networks will help us achieve a goal of eventually delivering speeds up 100 Mbps. We’ve done some testing which gives us confidence that we can do that. That’s where we are headed, and the goal is to be there by 2017,” said Johnston.