Eutelsat Tapped for Broadband in Guyana 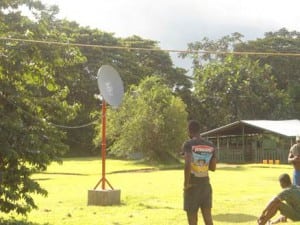 An installation on the Guyana Defence Force military base in the New River Triangle. Photo: Eutelsat

[Via Satellite 09-02-2014] iNet Communications, the licensed telecoms provider for Global Technology in Guyana, has entered an agreement with Eutelsat for its IP Easy satellite broadband service. Under the agreement, Global Technology will offer broadband connectivity through iNet with download speeds of up to 10 Mbps throughout the South American country.

The Guyana Defence Force has also submitted an order for terminals at four remote locations in the Amazon. New River Triangle base, the first of the four, has completed its installation with the other three soon to follow.

Additionally, several mining facilities in Guyana have purchased IP Easy. The satellite service is resistant to heavy rainfall experienced at Amazonian sites through the use of Newtec equipment.