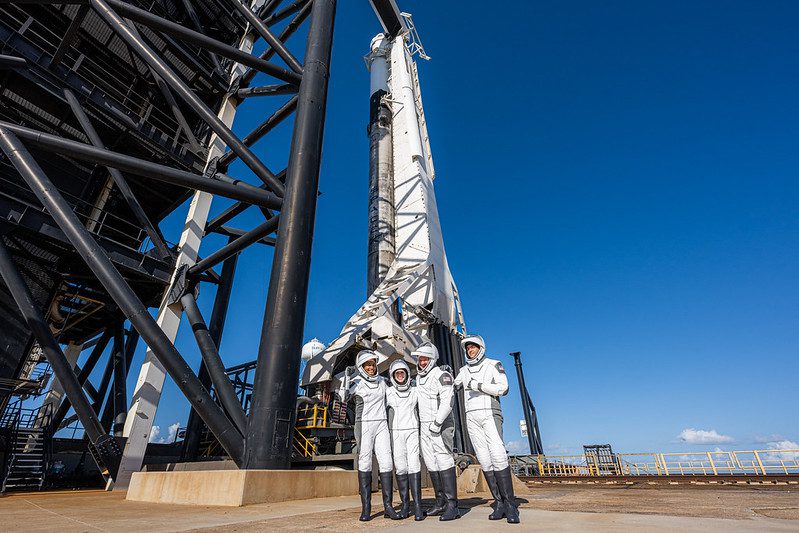 The Inspiration4 crew in front of the Falcon 9 before liftoff. Photo: Inspiration4/John Kraus

An all-civilian crew dubbed Inspiration4 is currently orbiting the Earth in a major milestone for commercial spaceflight. SpaceX launched the crew of Inspiration4 on a Falcon 9 rocket on Wednesday evening from NASA’s Kennedy Space Center.  The group is going through a three-day journey on a Crew Dragon spacecraft, orbiting many times around the Earth.

Jared Isaacman, founder and CEO of Shift4 Payments, is the benefactor behind the mission, which is raising money for St. Jude Children’s Research Hospital. Isaacman started the mission with an initial $100 million gift to St. Jude, and the mission is working to raise $200 million through February 2022. Isaacman is a jet pilot and the commander of the mission.

Two of the seats were chosen by St. Jude: crew member Hayley Arceneaux, a former St. Jude cancer patient who now is a physician’s assistant for the hospital; and Chris Sembroski who got a spot on the crew through a St. Jude raffle. Shift4 Payments ran a contest for the final seat, and geoscientist and science communication Dr. Sian Proctor won.

“Our crew carries the responsibility and importance of this mission as we prepare to blast off,” Isaacman said before the launch. “We have been well-prepared for the challenges ahead of us the next three days and look forward to sharing our experience with the world as we continue to bring attention to St. Jude Children’s Research Hospital here on Earth.”

The crew went through a variety of training activities over a six-month period, and their journey has been cataloged in a Netflix documentary series.

So far, neither SpaceX or Netflix has shared video or photos of the crew in orbit, but SpaceX posted an update on Thursday afternoon that the crew is happy, healthy, and resting comfortably. They are conducting various research experiments while on the trip. The Inspiration4 team will reenter the Earth’s atmosphere for a soft water landing off the coast of Florida after three days.

The journey is not only significant for its all-civilian crew, but it also marks the first free-flight Crew Dragon mission, and the first orbital human spaceflight mission that will not dock with a space station since the final Hubble mission on STS-125 in 2009.

“The all-civilian Inspiration4 astronauts are paving the way for a future where space is more accessible to all who wish to go, and we are so proud that they entrusted us to fly them,” said SpaceX President and COO Gwynne Shotwell.