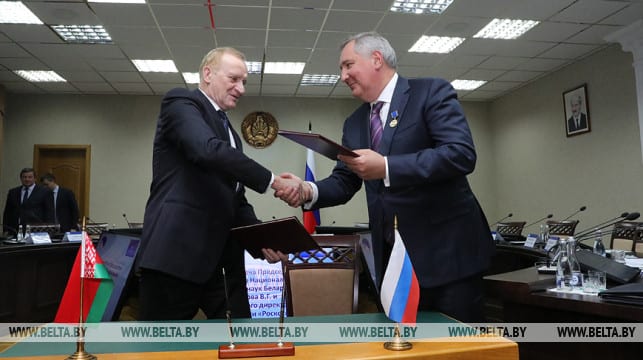 Chairman of the Presidium of the National Academy of Sciences of Belarus Vladimir Gusakov and Director General of Roscosmos State Corporation Dmitry Rogozin. Photo: BelTA

The National Academy of Sciences of Belarus and Russia’s Roscosmos State Corporation have agreed to expand the joint orbital group of satellites involved in remote sensing of Earth, according to the Belarusian Telegraph Agency. The two entities will add two Russian satellites Canopus-B and Canopus-B-IK to bring the orbital group to seven satellites. Also, the countries will exchange information obtained by the satellites with each other free of charge.

“By putting together these satellites, we will be able to get information not once in 16-17 days, but virtually in the real-time mode,” said Chairman of the Presidium of the National Academy of Sciences of Belarus Vladimir Gusakov.