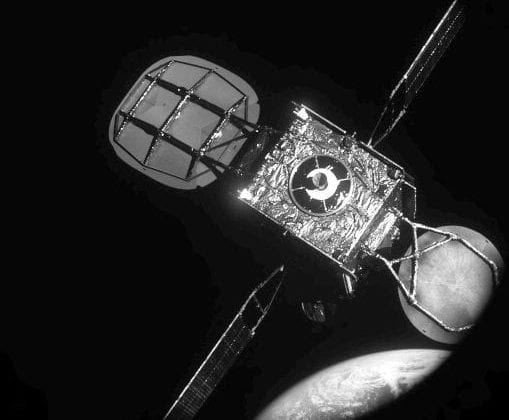 View of IS-901 satellite from MEV-1 “near hold” position during approach. Photo: Northrop Grumman

Northrop Grumman Corporation and its SpaceLogistics LLC subsidiary have successfully docked two commercial satellites in orbit, a historic first. The Mission Extension Vehicle-1 (MEV-1) was docked to the Intelsat 901 (IS-901) spacecraft in order to provide life-extension services, which will also mark the first time mission extension services have been offered to a satellite in Geostationary Orbit (GEO). The docking was completed on Tuesday at 2:15 a.m. ET.

IS-901 is an operational communication satellite that is running low on fuel. Intelsat removed 901 from service in December 2019, transferring customers to other satellites, in order to raise its orbit to the same altitude as MEV-1 in preparation for docking. The combined spacecraft stack will now perform on-orbit checkouts before MEV-1 begins relocating the combined vehicle to return IS-901 into service in late March. MEV-1 is under contract to provide five years of life extension services to the IS-901 satellite before returning the spacecraft to a final decommissioning orbit.

Northrop Grumman is also scheduled to launch its second Mission Extension Vehicle, MEV-2, later this year, which is contracted to provide service to a different Intelsat satellite. The company plans to  establish a fleet of satellite servicing vehicles that will also provide inclination changes and spacecraft inspections, and in-orbit repair and assembly.