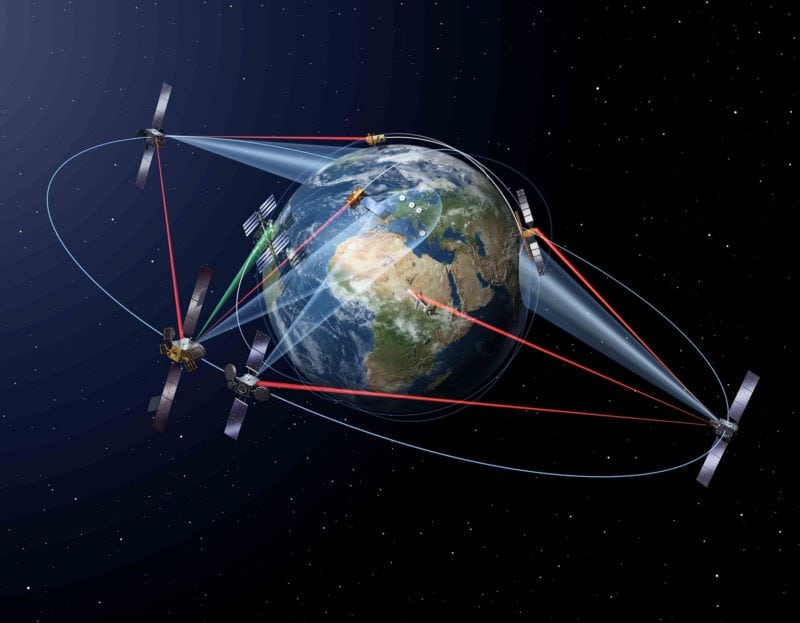 The SpaceDataHighway system, a public-private partnership between the European Space Agency (ESA) and Airbus, has achieved 10,000 successful laser connections. The reliability rate has reached 99.8 percent, and during the first one and a half years of routine operations, these successful connections have downloaded more than 500 terabytes of data.

The system’s satellites are designed to lock on to low-orbiting satellites via laser and collect their data as they travel in Low Earth Orbit (LEO) scanning the Earth. From its position in Geostationary Earth Orbit (GEO), the SpaceDataHighway acts as a relay, transmitting the large quantities of data down to Earth in near-real time, at a speed of 1.8 Gbit per second.

The establishment of the laser connections is controlled by the SpaceDataHighway’s Mission Operation Centre, which operates 24/7 at Airbus premises near Munich. The laser communication terminals are developed by Tesat-Spacecom and the DLR German Space Administration. Operators receive transmission requests from customers, program the space and ground segment, and monitor the performance of communications.

Each day, the SpaceDataHighway is able to relay up to 40 terabytes of data acquired by observation satellites, Unmanned Aerial Vehicles (UAV), or aircraft to Earth. It is currently used by the European Union’s Copernicus programme, but its capacities could be used by many more customers. In 2019, the system will also relay information from the Columbus module of the International Space Station (ISS). From 2020 the Pleiades Neo satellites will begin to use the SpaceDataHighway.