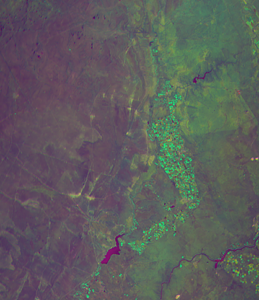 Satellogic, which operates a constellation offering high-resolution and hyperspectral data, announced it has closed a $27 million Series B funding round. The Series B round closed the same week as the launch of the company’s sixth micro-satellite (the third in its high-resolution imaging constellation) on June 15 from the Jiuquan Satellite Launch Center in China.

Investors in this round include the Chinese company Tencent as the lead, backed up by Sao Paulo-based Pitanga, CrunchFund and other investors.

Satellogic has created a micro-satellite platform that enables affordable monitoring of the planet at one meter of resolution, and high-frequency hyper-spectral data solutions ideally suited for advanced geo-intelligence and other applications.

The hyperspectral camera is capable of 30 meter spatial resolution from orbit and has the ability to discern narrow spectral bands positioned with nanometric precision along the visible and near-infrared spectrum. Hyper-spectral imaging allows the advanced identification of both materials and molecular processes, and is particularly well-suited for agriculture, environmental and climate-change monitoring. Other applications of hyperspectral data include land use classification intelligence for industry and government planning as well as forecasting, mineralogical discovery and forestry management.

With the March 2017 de-commissioning of the NASA Hyperion bird, Satellogic stated it is now the sole supplier of high-resolution hyper-spectral imagery in the world.