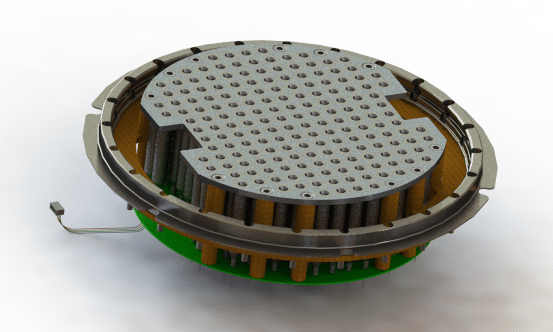 PacSci EMC announced the release of its new Modular Architecture Propulsion System (MAPS) for the small satellite market. According to the company, the compact design of MAPS reduces cost of integrating the propulsion system with the satellite and launch vehicle, and shortens the time from fabrication and testing to integration on the launch vehicle by up to 78 percent.

MAPS is a solid, clean-burning propellant array of rocket motors. By using a solid propellant (rather than hydrazine or even a less toxic liquid propellant) there is no need for valves, fittings, welds, filters, heaters or complex thrusters, reducing assembly time and cost and improving system reliability. The solid propellant does not contaminate optics or solar panels and does not require warm-up time. There is also no need to fuel the system, which can save approximately one week during launch vehicle integration.

During operation, the propulsion system is operational anytime within 300 milliseconds. The thrusters can be fired in pairs, triplets or any symmetrical combination to achieve predictable and repeatable delta-V increments and variable acceleration. The hermetically sealed motors are ready to fire at satellite deployment and for 10 or more years for deorbit or decommissioning.

According to PacSci, MAPS is configurable to fit the mission, and the compact design fits in the unused separation system or other spaces, leaving plenty of payload room. MAPS can also be configured as a standalone system with attitude control and communications for satellites and upper stages. The system’s bolt-on design eliminates complex integration within the satellite.