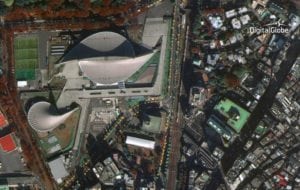 [Via Satellite 12-05-2016] Satellite earth imagery company DigitalGlobe has released the first public image from the recently launched WorldView 4 satellite. The first image, captured on Nov. 26, shows the Yoyogi National Gymnasium in Shibuya, Tokyo; it can be viewed and downloaded on the WorldView 4 microsite.

The photo comes courtesy of the Harris Corporation-built high-resolution, multi-spectral imaging system, which is onboard the Lockheed Martin-built WorldView 4 commercial Earth imaging satellite.

Orbiting at 617 kilometers above the earth and traveling 17,000 miles per hour, WorldView 4 more than doubles DigitalGlobe’s capacity to collect the high-resolution, 30 cm commercial satellite imagery — capturing as much as 680,000 square kilometers of the Earth’s surface per day, according to the company.

As part of a commercial imaging satellite constellation, WorldView 4 aims to enhance global security and transparency, power location-enabled applications and mapping services and support the rapid response to global humanitarian crises, among other initiatives, according to the company.