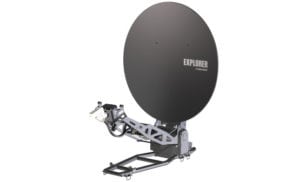 The Explorer 8120 is available in Ku-band configuration and works with most major satellite networks. The VSAT’s larger reflector dish provides for improved service availability and higher throughput across more of the satellite footprint.

Standard vehicle mounted Comms-On-The-Pause (COTP) VSAT antennas can lose connection to the satellite due to even slight vehicle movements caused by high winds or people getting in and out. Cobham added dynamic pointing correction technology taken from its maritime stabilized VSAT antennas to reduce the risk of losing the signal.

Cobham has also added the new high power 20W Block Up Converter (BUC) to the Explorer 8000 family for both the 1 and 1.2 meter antenna systems.