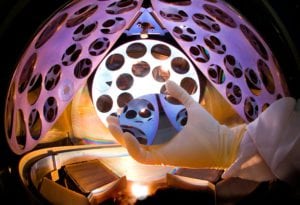 [Via Satellite 08-02-2016] Boeing subsidiary Spectrolab has created a new space solar cell achieving an energy efficiency of 30.7 percent. This efficiency — the metric for how much sunlight a cell can convert into usable energy — is higher than any other comparable model currently available, according to the company.

“As space has become more accessible to private companies and countries, competition to provide the highest-powered spacecraft at the lowest cost has intensified,” said Tony Mueller, president of Spectrolab. “The increased efficiency of the XTJ Prime solar cell drives a lower-dollar-per-watt solution, meaning spacecraft using this new cell will be lighter and less expensive to build and launch, and more powerful once in space.”

Spectrolab provides products to the commercial satellite industry, the U.S. Department of Defense, NASA, and domestic and global aerospace companies. Earlier this year, the company’s solar cells helped set a new record with NASA’s interplanetary probe, Juno, which travelled farther from the Sun than any other solar-powered spacecraft, reaching more than 517 million miles on its way to Jupiter.