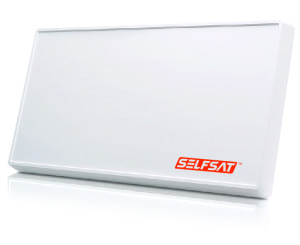 The SelfSat–H21DCSS is a low-profile flat antenna measuring 517mm by 277mm that performs the same function as a parabolic satellite antenna, but is unobtrusive and can be easily self-installed in homes and apartments.

The antenna uses MxL862 to digitize the entire satellite spectrum and deliver up to 32 user bands over a single cable. The MxL862 is part of the MxL86x family of dCSS SoCs and features two FSC wideband RF inputs with a single L-band IF output. The device is a single-chip dCSS solution, integrating FSC analog-to-digital converters, a digital channel-stacking engine and a digital-to-analog converter for single-cable satellite signal distribution including filters, communication modems and a microcontroller. The single chip MxL862 dramatically reduces system costs and significantly reduces thermal design challenges, according to MaxLinear.

The new SelfSat–H21DCSS is part of a family of flat satellite antennas that also includes a SAT>IP version based on the MxL584 FSC receiver, for distribution of up to eight satellite TV channels to any connected device in the home.