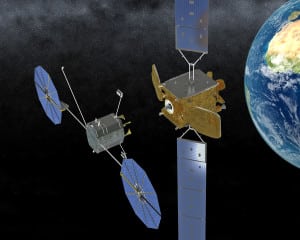 [Via Satellite 04-13-2016] Intelsat and Orbital ATK have announced a new satellite life extension service agreement where Orbital ATK will extend the life of an Intelsat satellite by five years using the company’s Mission Extension Vehicle (MEV).

Orbital ATK will manufacture, test and launch the first Mission Extension Vehicle, MEV 1, based on the GEOStar platform, and will conduct in-orbit testing to validate the spacecraft. Launch is currently slated for 2018, with mission extension service for Intelsat beginning in 2019.

“Given the size of our satellite fleet, any technology that enhances our in-orbit flexibility allows us to be more responsive to our customers, such as extending the life of a healthy satellite so that it can be deployed for a late-breaking opportunity at another orbital location or maintaining service continuity before the arrival of new technology. We have actively supported in-orbit servicing from its inception, and are proud to pioneer with Orbital ATK on this game-changing innovation,” said Stephen Spengler, CEO of Intelsat.

Controlled by Orbital ATK’s satellite operations team, the MEV 1 uses a reliable, low-risk docking system that attaches to existing features on a customer’s satellite. MEV 1 provides life-extending services by taking over the propulsion and attitude control functions. The vehicle has a 15-year design life with the ability to perform numerous dockings and undockings during its life span.

“There is a vital need to service fully functional but aging satellites in both commercial and government markets. Backed by our continued investment, today’s announcement signals that we are just getting started in expanding our Commercial Servicing Vehicle (CSV) fleet to provide a diverse array of in-space services in the future,” said David Thompson, Orbital ATK’s president and CEO.

Orbital ATK’s vision is to establish a fleet of servicing vehicles that can address the diverse servicing needs of geosynchronous satellites as well as perform other services such as repair and assembly. Complementing the inaugural contract, Intelsat will also have the option to service multiple satellites using the same MEV.