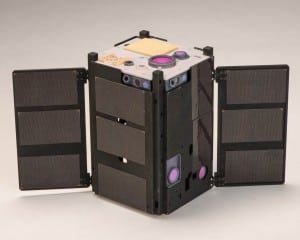 [Via Satellite 10-12-2015] NASA and The Aerospace Corporation have received confirmation the Optical Communications and Sensor Demonstration (OCSD) CubeSat, launched Oct. 8 by an Atlas 5 rocket, is in orbit and operational. The OCSD is testing a unique space-based laser communications system. The laser is hard-mounted to the spacecraft body, and the orientation of the CubeSat controls the direction of the beam. According to NASA, this makes the laser system more compact than anything previously flown in space. The CubeSat will evaluate the ability to point a small satellite accurately as it demonstrates data transfer by laser at rates of up to 200 Mbps.

OCSD is the first in a new series of six NASA-managed technology demonstration missions set to launch during the coming months using CubeSats. The second OCSD mission, scheduled to launch no earlier than Feb. 1, will use two CubeSats to demonstrate the ability to maneuver small spacecraft in close proximity to one another using low-cost sensors and a propulsion system that uses water as a propellant. BridgeSat, a startup collaborating with NASA, The Aerospace Corporation and Draper Labs, is seeking to commercialize laser communications technology from the OCSD mission for a network of optical satellites and associated ground stations.