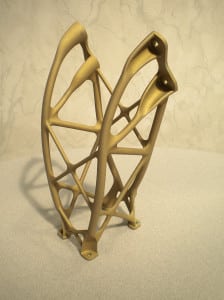 [Via Satellite 03-20-2015] 3T RPD, a pioneering U.K.-based additive manufacturing company, completed an Aluminum Additive Layer Manufactured (ALM) bracket for Airbus Defence and Space. The space-qualified 3-D printed component is the first of its kind following a two-year Research and Development (R&D) program with Innovate U.K. and the U.K. Space Agency.

The bracket is used for mounting the Telemetry and Tele-Command (TMTC) antennas onto the satellite, which communicate with Earth stations. Created as a single piece laser melted part, the bracket weighs 35 percent less than the previous bracket, which was made of four parts and 44 rivets. Additionally, it is 40 percent stiffer and resulted in less waste than conventional machining.

“Through developing and proving the design and manufacturing process, which significantly reduces the testing required, we can now look at what other opportunities there are for ALM components that will be lighter and quicker to manufacture,” said Amy Glover, senior spacecraft structures engineer responsible for the project.

The 3-D printing program seeks to design components that cannot be manufactured using conventional technology, such as a structural bracket for Airbus Defence and Space’s Eurostar E3000 telecommunications satellites based on aluminum alloy. Airbus Defence and Space also has plans to use ALM waveguides, heat pipes, propulsion components, secondary structures and tanks.