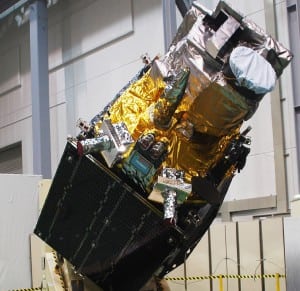 [Via Satellite 08-22-2014] Mitsubishi Electric has completed the manufacturing of Himawari 8, a geostationary weather satellite for the Japan Meteorological Agency. The satellite will soon be delivered to the Tanegashima Space Center in Japan where Mitsubishi Heavy Industries and the Japan Aerospace Exploration Agency (JAXA) will conduct an October launch using the H2A rocket.

The Himawari 8 satellite replaces Himawari 7, and includes several significant upgrades. Unlike its predecessor, the new satellite is capable of producing color images and an enhanced payload doubles the spatial resolution. Japan intends to share the weather data with more than 30 countries in the Asia-Pacific region.

For Mitsubishi Electric, Himawari 8 is the eighth satellite built on its DS2000 satellite bus. The company expects to have 15 satellites built on the DS2000 and hopes to increase its use amongst the global commercial satellite market. The next DS2000-based satellite, Himawari 9 is slated to launch in 2016.