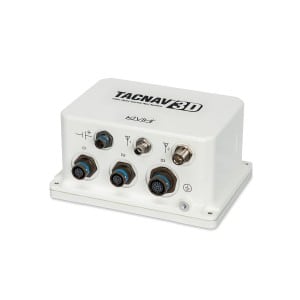 [Via Satellite 06-23-2014] KVH Industries released an inertial navigation system designed for battlefield activities for the company’s Tactical Navigation (TACNAV) family of products. The TACNAV Three-Dimensional (3D) system is fiber optic gyro-based, and provides full 3-D navigation with an embedded Global Navigation Satellite System (GNSS). It can function by itself as a standalone inertial navigation solution, or as the core of an expandable, multi-functional battlefield management system.

The system is designed for navigation for light armored vehicles, both wheeled and tracked, medium and heavy combat vehicles and main battle tanks. The system is fitted with an Iridium transceiver to send out and receive vehicle position, waypoint and target location to or from a command center or other vehicles. The system passes messages to the command center through Iridium’s short duration burst message function, and it can also receive and transmit Ethernet and CANbus signals, as well as RS 422 signals.

“For military vehicles operating on the modern digital battlefield, this completely modular package is a vital component for effective battlefield management,” said Dan Conway, KVH EVP for guidance and stabilization sales. “With a built-in communications option, TACNAV 3D is designed for short duration burst messaging, which can make a life or death difference to a soldier.”