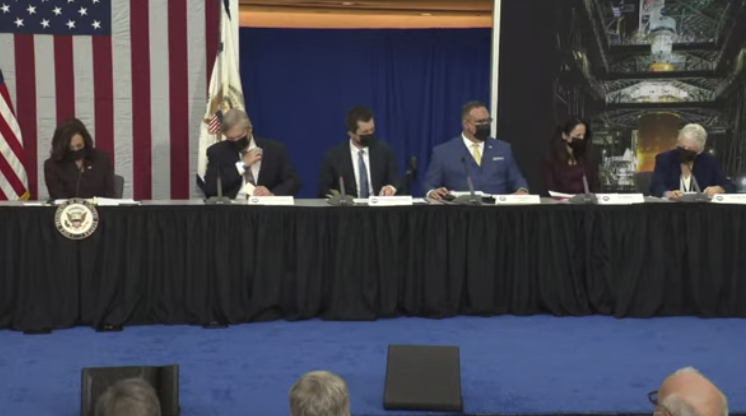 Vice President Kamala Harris led the Biden Administration’s first meeting of the National Space Council on Wednesday, calling attention to how space impacts life on Earth, and how space activities must be protected.

“While our exploration of space takes us up to the Moon, to Mars, to the edge of our solar system … I believe we have a responsibility to also look to our home planet. In this new era, we must see all the ways in which space can benefit Earth,” Harris said, opening the meeting. “This perspective is central to our work as a council because while exploration of space defined the 20th century — the opportunity of space must guide our work in the 21st.”

Wednesday’s meeting focused on three areas that fall within that framework — building a STEM workforce, addressing the climate crisis, and promoting rules and norms that govern space.

Space norms and rules were top of mind for the council, especially after the Russian Anti-Satellite (ASAT) weapon test on Nov. 15 that destroyed a defunct Russian satellite. The U.S. government condemned the test and said it generated more than 1,500 pieces of trackable debris and hundreds of thousands of pieces of other orbital debris.

Deputy Secretary of Defense Kathleen Hicks spoke out strongly against ASAT testing during the meeting, saying that U.S. Department of Defense wants “all nations agree to refrain from Anti-Satellite weapons testing that creates debris.”

Secretary of Commerce Gina Raimondo said the ASAT test was “absolutely a wake up call.” She spoke about the Office of Space Commerce (OSC), which Congress has directed to create a space traffic management pilot program and a repository with information on space objects.

“We are now deeply in the process of preparing for an operational system from the prototype in collaboration with our interagency partners, and in collaboration with the commercial industrial space sector,” Raimondo said. “Over the next several years, we believe we will be able to make that leap between the prototype and the commercial system, which will be incredibly important for space traffic and coordination.”

“The international community, through work at the United Nations and elsewhere, has made progress in developing norms to strengthen the safety and sustainability of space activities. But frankly, we’ve fallen short in addressing the risks of inadvertent conflict arising from growing national security activities in space,” Sullivan said. “You’ve heard from many people … about irresponsible and dangerous debris-generating weapons testing. If we were to allow that to continue, we risk allowing military activities in space to undermine the peaceful use of space by all.”

In addition, the council addressed how space can fight climate change, and building up the STEM workforce. Vice President Harris asked the Climate Policy Office, in coordination with the Office of Science and Technology Policy and the National Space Council, to establish a baseline of available space data and decision-making tools that are needed to tackle the climate crisis, and to improve access and awareness of this data.

National Climate Advisor Gina McCarthy summed up the importance of space-based data, noting that climate models that use satellite data have confirmed the extent of the climate crisis.

“Satellite-supplied data has been critical to confirm the true extent of the climate crisis we’re facing, and to inform the solutions we can bring to the table,” McCarthy said. “Space-based resources allow us to respond in real-time to the impacts of climate that we cannot stop and must be prepared to face.”

“Our priorities are broad, as is our framework,” she said. “Our framework covers many areas in which space activity is a source for American leadership and strength and American innovation and opportunity.”

It says the country will work with the commercial space industry to improve the cybersecurity of space systems, ensure efficient spectrum access, and strengthen supply chain resilience for the space industrial base.

The priority of preserving space for current and future generations deals with issues around space governance and sustainability — more important than ever after the recent ASAT test.  The framework says the U.S. will promote existing measures and “lead in the development of new measures” for space sustainability.

The framework also says the U.S. will transfer space situational awareness information to an open data platform hosted by a U.S. civil agency, and that the U.S. will lead the development of “open, transparent, and credible international standards, policies, and practices that establish the foundation for global space traffic coordination.”