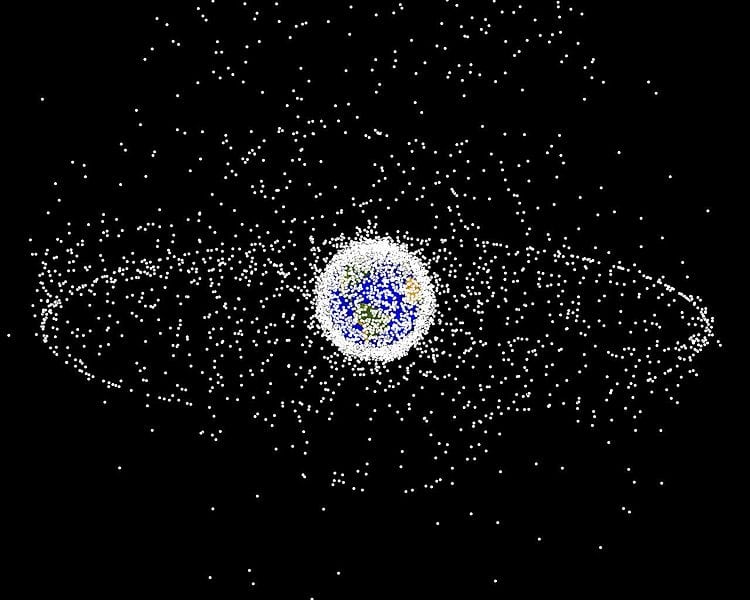 Rendering of projected orbital debris in two primary fields: the ring of objects in geosynchronous orbit (GEO) and the cloud of objects in low Earth orbit (LEO). Photo: Wikimedia Commons

The panel’s chairman, Michael Dominguez, a former senior official with U.S. Department of Defense (DoD) and the director of the Strategy, Forces and Resources division at the Institute for Defense Analyses (IDA), said that “the risk of orbital collisions has grown astronomically” and that Space Traffic Management (STM) “has become an urgent concern — one that the government must address in order to ensure orbital safety, as well as enhance U.S. commercial and research advances in this critical domain.”

A number of wealthy entrepreneurs, including Elon Musk, Jeff Bezos, and Richard Branson, “have used their wealth to overcome high fixed-cost barriers to entry, launching companies based on new approaches to the technology and management of space access,” per the report. “In many cases, these investments have proceeded with limited if any government investment, making them less amenable to government regulation.” Musk owns SpaceX, while Bezos owns Blue Origin, and Branson owns Virgin Galactic and Virgin Orbit.

“The space operating environment has become more contested and competitive,” Air Force Maj. Gen. Stephen Whiting, the deputy commander of U.S. Space Force said in a statement. “This is driving the need for the U.S. Space Force to focus our space domain awareness capabilities on the military-unique aspects of our mission.”

Whiting said that allowing OSC to oversee “basic” Space Situational Awareness (SSA) and STM functions “frees up the Department of Defense’s resources to focus on national defense, while allowing the Department of Commerce to rapidly innovate and mature the service called for in NAPA’s report.”

The study said that the FAA Office of Commercial Space Transportation must “maintain its able leadership in the sphere of regulating launch and reentry, especially as it faces an upsurge in the volume of launches.”

“The role of DoD remains critical to mission success in STM,” per the report. “OSC must find ways to leverage the DoD data and capabilities to produce them in order to advance this important mission. DoD and other national security agencies’ capabilities are classified and must remain so, but there is opportunity for OSC to use these to benefit the commercial space sector appropriately.”

The report also said that Congress should pass legislation to ensure OSC “has the requisite on-orbit authority allowing it to promulgate STM regulation(s), when appropriate, for orbital operations that fall outside the current licensing and continuing supervision framework.”

“The Congress should also promptly act to provide DOC with the correct mix of appropriated funds and the authority to assess and utilize fees so that OSC can build this critical capability with the requisite personnel, office infrastructure, and authorities,” per the study.

The panel recommended that OSC collaborate with other federal agencies on STM, including DoD, NASA, the Department of State, and the Federal Communications Commission.

“With respect to transition of SSA [space situational awareness] information to non-U.S. Governmental entities from DoD and DOC, OSC already has the authority to collect, share, analyze and disseminate data,” the report said. “That said, the panel calls on the Congress to make this existing authority (embedded in 10 USC 2274) even clearer in statute in order to benefit the entire space sector.”