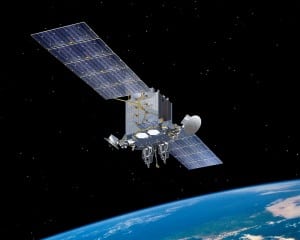 An artist rendering of a U.S. Air Force Advanced Extremely High Frequency (AEHF) satellite which connects to the FAB-T terminals

[Via Satellite 07-14-2014] Shortly after winning the U.S. Air Force competition on the Family of Beyond Line of Sight Terminals (FAB-T), Raytheon is preparing to deliver on its $298 million contract. Scott Whatmough, Raytheon’s VP of integrated communication systems, told reporters on a July 10 conference call that the company has finished the design and manufacturing of the Low Rate Initial Production (LRIP) configuration.

Raytheon’s contract is structured for two LRIP periods followed by full rate production. Whatmough said the Air Force has not yet decided on the LRIP quantities, which Whatmough said will be based on timing and need. He expects it to be a small number. In the meantime, Raytheon will soon begin testing the terminal.

“We will be starting airborne testing within the next month. We are delivering a terminal to be installed on a test aircraft, and a ground terminal that will allow those two to communicate, and then the rest of the environmental software qualification testing, and then ultimately the full Design Verification Test (DVT), which demonstrates all of the capabilities of the system,” he said.

The Air Force contract tasks Raytheon with building 84 terminals for E4 and E6 aircraft and for ground-fixed and ground-portable sites. FAB-T provides Presidential and National Voice Conferencing (PNVC) for senior level communications with anti-jamming capability, and can operate even in a nuclear environment. The original contract included 132 Airborne Wideband Terminals (AWT) for B2, B52s and RC135 aircraft, but these were dropped in order to reduce spending. The remaining 84 are all Command Post Terminals (CPTs). Whatmough said there might be other applications for FAB-T in the future.

“I don’t have specifics, but … as the Air Force goes and introduces new platforms, it’s probably reasonable to assume that some of them will have to have this kind of a communications capability,” said Whatmough. “We have been in this EHF business for 30 years, and the one thing that is consistent is that when this ability becomes available to the warfighter, more and more people want it.”

As of the conference call, Raytheon has not received any orders for LRIP or for production. Whatmough said he would be surprised to see that the number of terminals deviates wildly and that the Air Force generally does a thorough job of acquiring spares. Raytheon has not received any funding beyond the $31,274 given at the award announcement. The company anticipates a decision on LRIP and production within about a year’s time, but Whatmough was not comfortable giving a quarter.