Space Startups Received a Record $15B in Financing in 2021, BryceTech Reports

Investors gave a staggering $15 billion in total financing to startup space companies in 2021, according to a report published Wednesday by BryceTech. This nearly doubles the previous record of $7.7 billion in financing that space startups received in 2020, and represents a figure that is more than half of NASA’s entire 2022 budget ($24.04 billion).

BryceTech, which is considered a leading authority in space sector analysis, said its research shows that the number of recipients and deals involving startups both increased nearly 50%, while the average deal size grew 35%.

A significant share of space sector financing growth was driven by private capital — a trend that has continued for the past few years. BryceTech said in its report that venture capital investment in the sector grew 82% year over year in 2021 and the total number of venture capital deals grew 54%. Since 2016, the average venture capital deal size in space has steadily increased to $75 million. 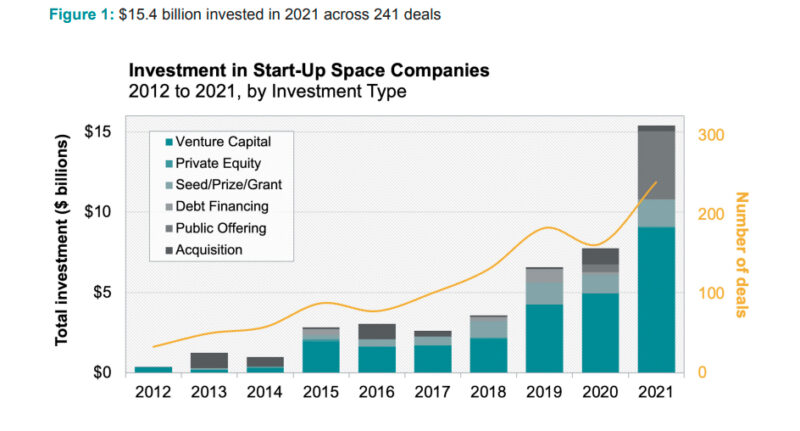 “[Our] report illustrates a record-setting year for startup space funding and discusses how future performance risks remain for some space ventures, due to unproven business models, uncertain customer bases, and typically lengthy time horizons for space businesses to mature,” BryceTech said in a statement issued with the report.