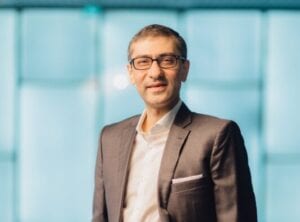 Inmarsat‘s new CEO Rajeev Suri urged the space industry to achieve a “Net Zero” space sustainability equivalent and address what he called “the ever more congested Low-Earth Orbit (LEO)” during a July 8 speech at the UK Space Comm event in Farnborough.

“Net Zero” is a reference to an environmental initiative to achieve net-zero carbon dioxide emissions on Earth.

In one of his first public appearances since joining Inmarsat in February, Suri, a Singaporean business executive and former CEO of Nokia, told the event’s attendees that achieving space sustainability would be a top priority for the operator.

“We cannot drive space growth in an unsustainable way,” said Suri. “We are committed to space sustainability at Inmarsat. I know that many of you are as well. I would urge that we all come together, with the support of the U.K. government, to ensure that this issue is addressed seriously and consistently in the years to come.”

Inmarsat, headquartered in London, is a founding member of the Space Data Association, which works with other satellite operators to share critical data on satellite positions and movements. Many of Inmarsat’s competitors operate in LEO, or have constellations planned for the future.

Suri also used his speech to urge the U.K. space industry to broaden and deepen its national supply chain to ensure long-term health.

“[We should]… ensure procurement decisions across industry and government broaden and deepen the supply chain,” said Suri. “The U.K. should choose flagship projects that drive implementation of a national strategy where there is a clear intersection with other priority sectors. For example, consider the often-discussed national Position Navigation and Timing program. It would increase resilience, reduce reliance on existing, ageing, non-sovereign systems, support domestic jobs and innovation and help meet the requirements of our allies. From our perspective it is absolutely indispensable to the country’s future.”