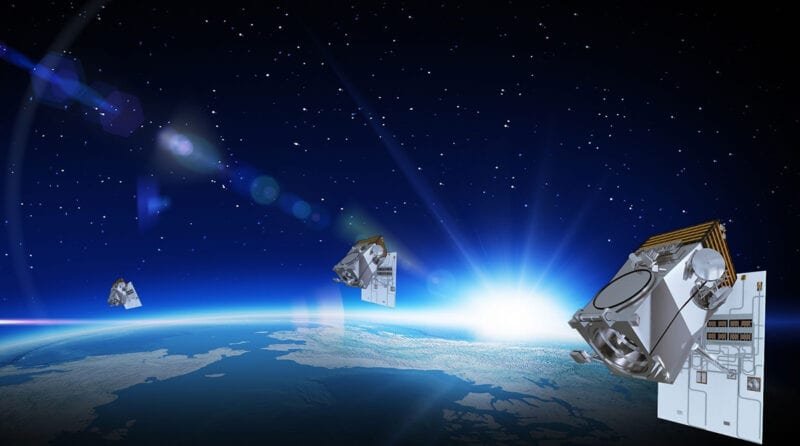 Maxar Technologies stock climbed over the $24 per share mark Thursday morning after posting strong second quarter results and reporting $500 million dollars in liquidity after its April 2020 sale of MDA. Maxar stock value has tripled during the past year, reflecting a remarkable turnaround for a company that continues to remain resilient through a COVID-19-fueled economic crisis.

The Colorado-based space infrastructure company’s total revenues increased 7% year-over-year during the second quarter, with growth across all company divisions. During the company’s 2Q earnings call, Maxar CFO Biggs Porter said that new contract awards and U.S. government and military program expansions drove growth in its Earth Intelligence (6% year-over-year) and Space Infrastructure (2% year-over-year) divisions — the latter bouncing back from declines in previous quarters. These gains were slightly offset by lower commercial revenue and bookings due to COVID-19.

“Importantly, we expect this trend to reverse in the second-half of the year, given recent commercial awards that are beginning to ramp,” said Porter, who added that Maxar’s adjusted consolidated EBITDA margins increased 520 basis points year-over-year, driven by margin expansion in both its operating segments and lower corporate expenses.

Maxar ended the quarter with a total order backlog of $1.9 billion  (a gain of $300 million from the previous quarter) and a net income of $306 million, which includes after-tax gains on disposal of discontinued operations and from the sale of the MDA business in April. Adjusted EBITDA was $138 million, which is 31.4% percent of its consolidated revenues. This compares to adjusted EBITDA of $108 million and 26.2% from the second quarter of 2019.

BMO Capital Markets analyst Thanos Moschopoulos praised the company’s 2Q performance and raised the firm’s estimates and target price. “[Maxar’s] Q2 2020 results were significantly above consensus,” said Moschopoulos. “The outlook for the business has clearly improved, given a better backlog and return to profitability in the Space Infrastructure segment.”

Maxar President and CEO Dan Jablonsky, who has led the company’s turnaround since taking the top C-suite chair in January 2019, said that strategic operational realignment and debt reduction, combined with resilient demand from end-users have stabilized the company and provided the financial padding needed to navigate a contracting global economy.

While acknowledging that COVID-19 creates “unknowns” that Maxar will have to deal with, Jablonsky said the company will use its healthy cash supply to invest in future growth opportunities, including those provided by its acquisition of 3D geospatial company Vricon in June.

“We’ll make investments in critical technologies, such as the 3D software and intellectual property that Vricon brings to the table to assure that we are in an advanced position to help our customers perform their critical missions,” Jablonsky said to reporters during its conference call. “We now have an opportunity to expand margins over time, through improved execution in our Space Infrastructure business and via mix, which we believe is likely to favor our data and data analytics businesses. Said another way, there’s some self-help here, as well as some growth-driven margin expansion. We will achieve that both by streamlining our operations, being disciplined with new bookings, and making investments to drive growth.”

Jablonsky and Biggs also gave updates on the development and launch of Maxar’s upcoming Earth imaging constellation, WorldView Legion, as well as its bid to build Telesat‘s LEO constellation.

Jablonsky said that while he couldn’t rule anything out, he does not expect the company to fully participate in building Telesat’s LEO constellation. Analysts and industry watchers pegged Maxar as a top candidate to build the Canadian operator’s new system.

“We’re very happy to help Telesat if their expectations or timing change here. We just don’t want people thinking we were deep in the throes of this and getting ready to announce something in the near-term,” he said during the earnings call. “Telesat has been a longtime customer of ours. We built a lot of GEO satellites for them. If and when they need us, either for that or for the Telesat LEO program as it may morph in the future, we’re very happy to provide services. So it’s potential upside in the future, but I wouldn’t say it is something we’ve modeled into the guidance we’ve given long-term.”

In regards to its own new constellation, Legion, Biggs said that Maxar expects to start investing more money in the program this year as it progresses to an expected launch in 2021. “The exact timing of expanding the Legion program this year versus next year can always vary a little bit and we have other discretionary CapEx that we’ll have to watch,” said Biggs. “But, we do expect next year’s free cash flow to certainly be much better because of the completion of Legion program. Next year could be free cash flow positive … The Legion program is still progressing, as we expected from an overall budgetary standpoint. We still expect to launch Legion in the first-half of next year.”

BMO’s Moschopoulos believes that Maxar’s elevated leverage will constrain the company’s stock valuation until the launch of Legion draws nearer and after customers are transitioned off of the existing EnhancedView system. “Our expectation is that the revenue opportunity for Maxar is more likely to increase than to decrease, given Legion, but in the meantime, the transition creates some incremental uncertainty.”