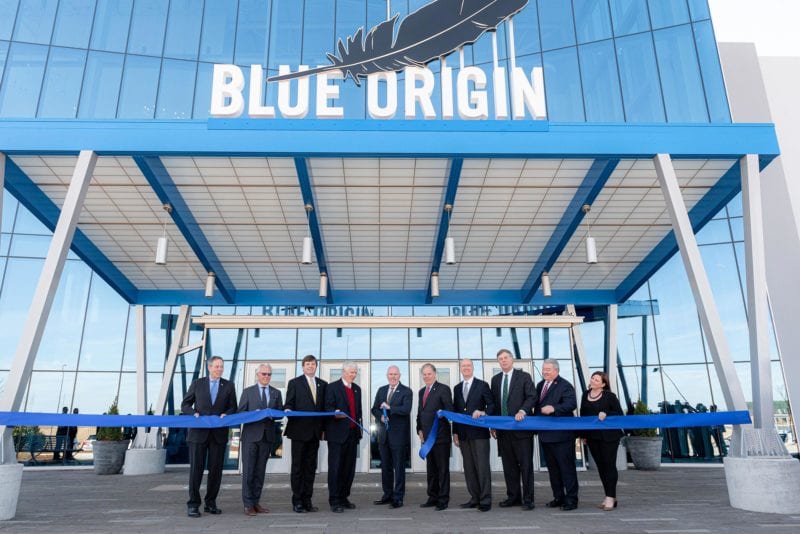 Blue Origin opened its rocket engine production facility in Huntsville, Alabama on Monday. The company plans for this 350,000 square-foot engine manufacturing facility to conduct high rate production of the BE-4 and BE-3U engine, which will undergo testing at NASA Marshall Space Flight Center. The company is investing more than $200 million into this facility and plans to bring more than 300 jobs to the local economy. Huntsville was chosen for its skilled workforce and leading role in rocket propulsion.

According to a fact sheet, the Thrust Chamber Demonstrator on the BE-3U has completed over 2,100 seconds of test. The engine is optimized to operate in the vacuum of space, and two of these engines will power the New Glenn orbital rocket’s restartable upper stage. The BE-4 achieved full power in 2019 and delivery of the engines to United Launch Alliance (ULA) will support Vulcan’s development activities and planned first launch in 2021. BE-4 will also power the New Glenn. Blue Origin is targeting late 2021 for the first orbital New Glenn flight.

“At the core of every successful launch vehicle program are the engines that power those vehicles to space. Early on in Blue Origin’s history, we made a crucial decision to invest in developing the next generation of reusable rocket engines. And now, it’s an exciting time for Blue, our partners and this country — we are on the path to deliver on our promise to end the reliance on Russian made engines — and it’s all happening right here, right now, in the great state of Alabama. We couldn’t be prouder to call this our home for engine production,” Blue Origin CEO Bob Smith said.